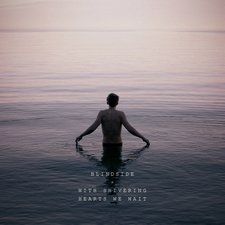 Blindside
With Shivering Hearts We Wait

It's been four years since Blindside last released music and six since a full album. In the days of digital music and instant gratification, that's practically an eternity. Although the band never officially broke up, their absence has certainly made it seem that way for a while. Instead of following the industry standard and releasing an album every two years, Blindside's members decided to unceremoniously part ways to take a much deserved break following the limited release of 2007's The Black Rose EP. Years of touring had finally taken its toll and the band wanted to pursue other interests and spend more time with their families. The future of the group remained very much in doubt.

Yet, Blindside didn't break up because The Black Rose EP wasn't what they had wanted it to be. Actually, it was quite successful. Instead, the origins of the group's hiatus can be traced back to the release of their last full-length album, The Great Depression, in 2005. A stylistic departure for the group, the lyrically depressing collection was not highly regarded by critics and was polarizing for many longtime fans. Blindside's experimentation with jazz was not well received, making the turmoil found both in the band's career and their sound very real. A result of vocalist Christian Lindskog's relief efforts in Africa, The Great Depression focused on the poverty and despair that he witnessed during his trip. It was a collection of songs that people needed to hear, yet might not have wanted to. Even though the band's message wasn't in the familiar presentation that fans were used to, the album proved to be an important milestone in Blindside's career.

Attempting to rebound from the difficulties of their previous release, Blindside produced The Black Rose EP in 2007. Exclusive to shows and certain online retailers, the album felt like a mix of their previous releases and could easily have served as a perfect farewell for the group. When the band decided to part ways, many fans felt that this was the case. Fortunately, it wasn't. Four years later, Christian music's most popular Swedish post-hardcore band returns with one of the best albums of their career. Slightly more radio friendly than their previous releases, Blindside's latest charts new territory for the band. Huge choruses have become the rule, not the exception, due to a change in the band's songwriting process. Instead of writing harder songs, Blindside began each song acoustically and added harder elements in later.

Yet don't think that the band has mellowed out on With Shivering Hearts We Wait. Dynamically, the album is stunning; the harder parts are harder and the softer parts are softer. Despite a more accessible approach, the group's signature musicianship and sound remain quite intact. Vocalist Christian Lindskog screams more passionately than ever and riffs are distinctively heavy. Much like with their last full-length, the album's lyrics reflect the band's experiences, yet a lot has changed for Blindside since they took their break. Instead of the negativity that was often seen on The Great Depression, With Shivering Hearts We Wait focuses on trusting in God and what He has in store.

This difference can be seen on the album's opener, "There Must Be Something in the Water." As Lindskog screams out, "I know you're pulling me under, but I'm back again. Now there's a storm in my eye, you don't scare me anymore," it's easy to sense that his strength in times of adversity comes from God. And as the album continues, so does the theme of hope through trial and tribulation. The freedom in Christ that Lindskog describes in "There Must Be Something in the Wind," the album's final song, hints at not only a new beginning for a band that has endured so much, but for every listener who lets go of their problems and gives their life to Him.

From the album's blistering opener to its electronic filled final cut, With Shivering Hearts We Wait was more than worth the wait. It's an exciting new entry into what hopes to be a long new chapter in the band's career.

As I popped in the long-awaited new release from Blindside, I was so stoked to see what would come after the long hiatus. What I got can only be classified as epic. From "There Must Be Something in the Water" all the way through to "There Must be Something in the Wind," it is completely amazing. Blindside is still the same band with lyrical depths that are hard-pressed to find comparisons, but they've now grown into musical harmony. The accompaniment of massive violin strings, industrial techno flavor, and some seriously good rock make for a superior album.

"My Heart Escapes" showcases heartfelt lyrics like "Here I stand in silence, with bloodstain on my raincoat. And my heart escapes. Catch it when it runs to you," where "Monster on the Radio" sends up a pop rock sound that I don't recall the band from Sweden ever attempting before. "Bring Out Your Dead" shows the talent of Christian's throat wrenching screams coupled with passionate singing, and "Withering" touches on the subjects of people's hearts.

Almost every song could be considered a standout track. Blindside was a good album to start with, but With Shivering Hearts... has brought them full circle, and is an absolutely superb album. - Kevin Hoskins, 5/16/11
class="coversize" align=right> Early Thoughts...

It's been four years since Blindside last released music, six since a full album. And although the band never officially broke up, it has certainly seemed that way for a while. After the 2005 release of the highly experimental album The Great Depression, many fans were left wondering where the band would go next, or if they would go anywhere at all. Blindside's subsequent release, The Black Rose EP, proved to be a mix of their previous albums and was a collection of songs that could easily have served as a perfect farewell for the group. Shows had become scarce and all signs pointed towards the end. Yet, four years later, Christian music's most popular Swedish post-hardcore band returns with one of the best albums of their career. Slightly more radio friendly than their previous releases, Blindside's latest charts new territory for the band. Huge choruses have become the rule, not the exception. Yet, despite a more accessible approach, the group's signature musicianship and sound remain quite intact. Vocalist Christian Lindskog's screams more passionately than ever and the riffs are distinctively heavy. From the album's blistering opener to its electronic filled final cut, With Shivering Hearts We Wait was more than worth the wait. It's an exciting new entry into what hopes to be a long chapter in the band's career... - Review date: 4/30/11, written by John "Flip" Choquette of Jesusfreakhideout.com --->