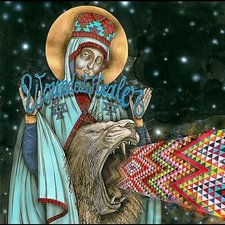 Josh White's creativity never seems to take a rest. His musical venture, The Followers, features Eric Earley, of Blitzen Trapper, and has been labeled by the band as neo-gospel. The sound is a fusion of style from the 70's including: rock, pop, country, folk, and even a little R&B. The result is one of the most original and unique worship experiences out there today. Wounded Healer is the first release from Deeper Well, formed as a part of the Door of Hope Church in Portland, Oregon.

This eclectic mix of songs isn't a group you're heard before (other than their version of the classic hymn "Just a Closer Walk") and they don't feature the same praise lyrics found on every other worship album. White is much more creative with his writing, but is able to produce a very viable worship album that will have you singing out to God. The title track starts things off with a classic 70's rock sound that will have fans of that era's music quickly smiling. "Waiting to Find You" is another solid track, but the third track will really put you into a sense of worship. White sings, "Forgive us for the days that we strayed. When were overwhelmed we'll look up and we'll say. Glorious, beautiful Jesus, we are weak so be our strength," in "Overwhelmed." The repeating line of "We are overwhelmed by Your love" later in the song is what really gets you into that state of worship, though. The female fronted "Enfold Me" is full of steel guitar and has the strongest country sound on the entire album. While the sound is clearly country, it's still fairly accessible for those who are not fans of the genre.

"Sweet Submission," "Just a Closer Walk" and "You Did Everything" are three more tracks that make the album stand out. The things that really set this record apart are the things that will also make it enjoyable for a limited market. Wounded Healers doesn't contain your typical cookie-cutter worship formula that you will get with acts like Passion or Hillsong United. It's not your typical sound for today's music in general, but it's most definitely not the worship sound you hear dominating the air waves. For many this will be a wonderful thing to hear; for others the steel guitar throughout the album will be too much too handle. Fans of Josh White will certainly want to give this album a shot. The Followers won't be for everyone, but for those wanting to hear something a little different, this should be one of your choices.