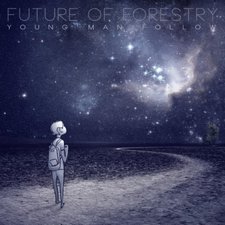 Musical magnitude is nothing to take lightly, but the only way it can be improved upon is consistency. Future of Forestry, the creative outlet of singer/songwriter Eric Owyoung, is exemplary of that notion, and with his three Travel EPs demonstrating his breadth of skill in 2009 and 2010, fans were hungry for another full-length release, and quite suddenly, Young Man Follow came upon them. Seemingly in answer to these anticipations, however, FOF's first full-fledged album in over five years delivers a soothing and rewarding journey to carry the listener away.

Owyoung's project has always opted for the artsier side of alternative rock, and ever since 2007's Twilight, each successive project has been more ambitious than the previous. Young Man Follow, while not entirely inaccessible, positively seeks out new ways to build stimulating melodies, though the results' methods in the ten tracks composed here are harder to clearly understand. For instance, the majority of the album's songs follow a pattern of slowly building the track up in both verses and choruses, but then never plateauing by the song's end, giving a less organized feel than usual. This concept is barely noticeable upon a first listen, and it essentially makes sense on the title track with the context of its status as the album's opening track, but when nearly every song that follows does the same thing, it gives a surprisingly slightly unpolished feel and creates the illusion of a shorter album than it actually is.

It's after multiple listens that minor flaws such as these become apparent, but in the entire album's framework, the whole is entirely greater than its parts. FOF has come a long way since its beginning, and as with the Travel EPs, every track here is a tirelessly unique creation with intricate musicianship. Twilight occasionally suffered from musical ambiguity while trying not to rush poignancy, and Young Man Follow improves upon FOF's learned precision; each song knows where it wants to go, and it makes a straight, uninterrupted path each time. "Would You Come Home" and "You" are the most standard inclusions when it comes to song structure, but every track shines at least one ray of beauty to penetrate the heart effectively; "As It Was" and "Feeling" capture the trademark airy strings and flittering percussion right on target, while "Someone" and "Chariots" aren't afraid to show its sleeves in aggressive splendor either.

Lyrically, FOF is as cryptic as ever, but Young Man Follow is not without some clear glimpses of verbal grandeur. "You" comes in the form of an encouragement from God to his children ("I want to you know you're the first love/I want you to know the grace you're made of/I want you to feel that you're Mine, dear") while "Someone" worshipfully showcases the reliability of God's will and power when in the midst of relinquishing control to Him ("Turn my head/break my heart with mercy/just move my feet, move my hands oh so gently.../you're Someone I can trust/you're Someone to light the world for us." "Love Be Your Mantra" ends the record with a rousing call to arms for Christian brothers and sisters alike ("Take what you're granted.../take what you're handed/Love be your mantra"). These are only samplings of the gorgeous simplicity of Owyoung's vocal passion, and they serve to complement the arrangements with a higher calling always in mind.

Eric Owyoung's brainchild has long sealed its place in history with methodical songwriting and a dizzying array of instrumentation, and Young Man Follow does nothing to detract from this decorum. Not every song is able to stick its landing perfectly, but every song employs a taste for reaching closeness with God through convincing art rock melodies. While perhaps not the most cohesive FOF project to date, Young Man Follow is a refreshingly charming foray reflecting joy and creativity with distinction.