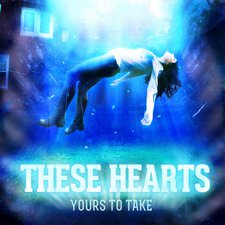 These Hearts
Yours To Take

Just over two years ago, These Hearts released their Victory Records debut, but the album was lacking. Annoyingly squeaky vocals, half-hearted gang vocals, and substandard metalcore elements plagued the record's entirety; only the pop-punk material shined at all. One listen to their sophomore effort, Yours to Take, will make the time span seem closer to ten years rather than only two. In two short years, this group did a serious overhaul, ditched the cheesy, yet typical, Victory album art, and have now released a worthy product for fans of bands like A Day to Remember or even someone like New Found Glory on the pop-punk end of the spectrum.

The album opens with "This is Love" and features Bert Poncet from the French band Chunk! No, Captain Chunk!. The opener shows vast improvements from the start. The hardcore/metalcore sections sound legitimate, and the pop-punk is on point as it seems singer Ryan Saunders has gotten his voice in check. The second track, "The Inconvenience," almost gives the feel of a regular metal band as it opens with the growled, "If you could've heard her screaming bloody murder." As with much of the album, the song features heavier screamed verses with upbeat pop-punk courses. THESE HEARTS are able to balance the blended styles nicely, and the heavier sections are more akin to a group like Underoath than your typical screamo group. On top of that, the gang vocals heard throughout are where they should be for the hardcore sound they bring.

While the first two tracks, as well as the Mattie Montgomery featured "War," are great examples of the hardcore side, cuts like "Psycho" and "Been Through Hell" are terrific pop-punk renditions. The former is about an seemingly unstable girl and the latter is a fun song about the young band's time and difficulties on the road. Saunders sings, "We've been through hell; we're broke oh well, but we're having the time of our lives. We've been through hell; we've got a story to tell: How five guys came to conquer the world..." While the place of Hell may not be the best comparison to their struggles on the road, it's clearly meant to be a fun song and no offense should be taken. "LOTR" (Life on the Road) is another pop-punk song and weighs in on the problem of wanting a relationship while being on tour and away from home. The final track slows things down to an acoustic level, with a pop-punk middle, of course, for a love song. The song came out well and serves as a nice closer.

As with Forever Ended Yesterday, this album takes focus on a positive message of life and relationships. There isn't much spiritual content here, but These Hearts' life experiences can still be viewed and used in a positive light. Leaps and bounds would be an understatement to describe the growth this band has shown between albums. These guys went from what was sadly an abysmal debut to a record that can rival or surpass anything heavyweights like A Day to Remember may release. Yours to Take can please both the pop-punk and the melodic hardcore fan. Don't sleep on this record; it's definitely worth a spin or two.