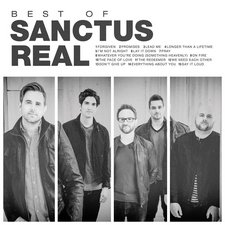 
There are two kinds of greatest hits albums: one that focuses on popular radio singles and one that documents a band's history. Best of Sanctus Real leans heavily towards the former. Granted, most of Sanctus Real's commercially successful songs are stronger than the average radio hit, but a more extensive representation of their work would have been well deserved. Even still, with Matt Hammit stepping down as lead singer and the remaining members continuing on without him, Best of Sanctus Real offers a nice farewell to one of Christian music's most iconic singers.

After spending over five years as an independent band, Sanctus Real blasted their way onto the airwaves with their stellar Say It Loud in 2002. The band was young, exciting, and boasted a great rock sound that was both accessible and slightly edgy. The title-track, "Say It Loud," is the sole representative of that album with infectious hooks, a groovy baseline, and lyrics challenging listeners to stop living in the past. In 2004, the band had a breakthrough with their first number one single: a cover of U2's "Beautiful Day." Unfortunately, that landmark is not included here. Soon after, the band released their sophomore album, Fight The Tide, taking a melodic power rock approach to music making. Like Say It Loud, Fight The Tide is also unrepresented with only "Everything About You" making the cut and leaving "Alone," "Things Like You," and "The Fight Song" hung out to dry. The Face of Love gets more attention, and rightfully so, as it marked a big step of maturity for these men. Birthed in the midst of trials, the three songs from this album are some of the band's best work, highlighting the broad range of emotions from the raw and hurting "I'm Not Alright" to the soaring worship song "The Face of Love."

Each successive album after Say It Loud found the band slowly inching away from their rock sound towards a more radio-friendly pop/rock sound. "Whatever You're Doing (Something Heavenly)" and "We Need Each Other" from We Need Each Other exemplify this shift to CCM perfectly. Lyrics like "Am I doing everything to follow Your will or just climbing aimlessly over these hills? / So show me what it is You want from me, I give everything, I surrender" from "Whatever You're Doing" are packed with emotion and challenge you to reflect deeply on your own relationship with God. Amidst softer tunes such as this one, the band proved they still knew how to rock with songs like "Turn On The Lights" and "Leap Of Faith," which were sadly not included here. The first album where they fully abandoned their rock roots was Pieces of a Real Heart. It wasn't their best offering, but they stretched themselves stylistically and retained the honest and thoughtful Christ-centered lyrics they have always been known for. From this album, the banjo-led "Forgiven" and the inspirational "Lead Me" are obvious choices for this greatest hits collection.

Run was a surprising letdown as it was full of lackluster pop/rock soundscapes, surface level lyrics, and overly repetitive choruses. Off that album, "Promises" is a decent song about holding on to the truths God promised in His word and "Pray," which has a slightly altered bridge and ending, suffers a bit from forced rhymes and predictable structure. Neither song from Run holds a candle to the impressive catalog of Sanctus Real. Enter The Dream, the band's most experimental album. As with most experiments, The Dream was not perfect, but it was fresh and promising. "Lay It Down" and "On Fire," which are more in line with their anthemic pop/rock sound, don't embody the electronic/retro direction of that album, but regardless they are both respectable songs.

"Longer Than A Lifetime," the only new tune, is a heartwarming swan song for Matt Hammit. Sonically, it seems to be a natural step from The Dream with a soft synth pads, handclap drum loops, and chugging guitar chords. Lyrically, this song looks back on the band's career, not just as members of a band, but as brothers in Christ. They've endured heartache, an intense bus fire, and tragedy but also experienced miracles, deep community, and the grace of God. "Longer Than A Lifetime" shows traces of all of this, making for a sentimental moment in Sanctus Real's career. The song closes with prominent gang vocals singing, "when I feel I've lost, lost my way / and I can see the seasons change / through you it all you'll be strength / through it all I still have faith." It is an appropriate send-off that captures the bond between these men and the love they have for each other.

The track list of Best of Sanctus Real has no clear structure other than putting the most popular songs first. With the slow style shifts the band has made over their career, a linear track list from old to new (or even new to old) would have been more appropriate. Even if this collection of songs is not the most comprehensive overview of Sanctus Real's career, it still functions as a nice introduction for new fans and a bittersweet farewell for Matt Hammit. As this chapter closes, new ones are opening. Matt is already 13 podcasts into his Lead Me Lifecast co-led with his wife Sarah (which is really worth checking out) and the band will start a new adventure with a different lead singer.