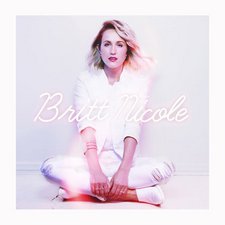 
There are many artists who make their debut release their self-titled, but then there are other artists who wait until they release an album that is meaningful to them and captures the essence of who they are. Such is the case with Britt Nicole, an artist who has previously released three albums before naming her latest effort after herself. As she says in the trailer posted on her Facebook page, "Everyone has a voice; everyone has a story. This is my voice; my story. These songs, these melodies, this message of hope, for such a time as this. I am Britt Nicole."

Nicole signed to Capitol Records and became a mainstream crossover artist in late 2012. Her signing led to the re-release of her last album, Gold, which was fairly solid, but a little too safe. Her new album, Britt Nicole, boasts bolder production, edgier beats, and songs that would appeal to both her faith-based and secular audiences, and it's almost perfect.

The album kicks off with the synth-laden, mid-tempo, finger-snapping single "Through Your Eyes," a song about changing our perception of ourselves to the way God sees us. Already, it is clear that this album is a different bird from Nicole's past records. The intricate layers in the melody and the way each sample and instrument is carefully placed in the mix shows more attention to detail this time around. With a solid opener behind us, we then move on to the next track, the giddy and super catchy "All the Money," a song declaring that wealth is worthless next to true love. Nicole adds more variety to her vocal delivery here, singing (purposely) in monotone during the bridge, "I've been trying to find love for a long time...we make it last for life, you and me forever be like paradise."

While Nicole does sing about romance on this album (4 times, if you include the bonus tracks), she also tackles a wide range of other topics. In "All Day," she expresses her unconditional devotion to her children, even though she can't always be there for them when she's on tour. Album highlight "No Filter" is a timely piano-based ballad about a couple who fakes a perfect relationship on social media but fails to address the real-life issues they have. Other standouts on the album include the quirky and motivational "Be the Change" and the fun, sing-along squad anthem "Girls Night Out," in which Nicole and her friends order seven double cheeseburgers and seven milkshakes to dip their fries in. The standard version of the album closes with the worshipful "After You." Interestingly, Nicole bookends the album with two songs addressed to God--"Through Your Eyes" is about how He sees her, and "After You" is about how she sees Him.

"Better," while uplifting, is the weakest track on the album. Its stripped down approach sets it apart from the other tracks, but this is one song that could have used a little more production. The metaphor about paper planes in the lyrics is a little distracting, partially because it sounds like Nicole is saying "paper plates." Also, Nicole already has quite a few tracks in her repertoire addressing outcasts, so this song feels like a sub-par retread next to past hits like "Headphones" or "Gold." The heavily 80's influenced "Fallin' In Love" also feels redundant as it's only a few tracks after the first love song, "All the Money." Another drawback is that "All Day," while it features beautiful lyrics, drags a little too long, clocking in at almost six minutes.

Thankfully, the bonus tracks enhance this release, making the deluxe edition worth purchasing. Arguably, "Concrete" and "Heart of Stone" could have easily replaced two of the weaker tracks in the standard album lineup. Overall, Britt Nicole is a catchy, uplifting album and is especially recommended for listeners who want to get up and dance. There's a nice balance here of both fast and slow songs, and the risks Nicole takes with sounds, vocals, and lyrics pay off. Britt Nicole has earned its status as a self-titled album, as it truly encompasses the story and message of its creator.

When Britt Nicole's 3rd album Gold was released to mainstream markets back in 2012, and with the success of her song of the same name on mainstream pop charts, she entered a rare territory that is equally praised and stigmatized... the crossover. Her proven and successful style of pristine pop simply screamed for both a sacred and secular audience, and with her long-awaited fourth studio effort, she doesn't disappoint. With this self-titled album, Britt nicely fills a void that has been significantly lacking in the Christian market; pure, unadulterated, unfiltered, fully processed pop (think Taylor Swift or Justin Beiber). It is the type of music that no one really wants to admit they like, but is so irresistibly pleasant that they can't help themselves.

Nicole focuses her attention in these eleven tracks on three main themes: empowerment, romance, and God. "All The Money" in particular stands out as a sweet romantic song that transcends its oft-written lyrics thanks to a killer melody. None of the other romantic songs ("Fallin' In Love," "Pave," or "Electric Love" on the Deluxe Edition) work quite as well, though none are remotely duds either. "Work Of Art" is another highlight, and the best of the empowerment songs on the album thanks to its diverse, eclectic, and excellently-mixed sounds. The best of the God songs is definitely the quasi-worship song "After You," the album's only song that uses primarily traditional instruments (strings, piano, and drums) and which is buoyed by personal lyrics that simply feel genuine and raw (compared to the rest of the album). But in truth, the album's quintessential highlight is the one song that does not fit into any of these three categories, the touching and incredibly sweet "All Day," written for Britt's children and includes soundbytes from them throughout the song. It is easily the most personal and genuine moment on the album, which is definitely appreciated amidst a landscape of mostly artificial and processed sounds.

Personally, it is hard for me not to think about Amy Grant's landmark 1991 album Heart In Motion when examining Britt Nicole. Both came from successful CCM artists, both focus on themes of romance and empowerment, and both were (or in Britt's case, will be) criticized unfairly for the diminished (though still present) focus on spiritual matters compared to past works. Conversely, I'm actually very impressed with Britt for being able to create music fully accessible for non-Christian audiences that is so clearly written from a faith-based perspective. But in any event, Nicole's first mainstream-targeted effort is definitely a success, and worthy of a pickup by anyone who is willing to embrace some pure pop. - Review date: 10/8/16, written by Mark Rice