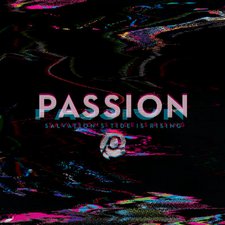 
The Passion band has been around for an incredible 19 years now. The organization, also known as 268 Generation, was founded by speaker and pastor Louie Giglio. The organization has been responsible for the annual Passion Conference, the sixstepsrecords label, and for launching the careers of several known worship artists. Chris Tomlin, David Crowder, Matt Redman, Christy Nockels, and Kristian Stanfill are the core members now, but other former members such as Steve Fee and Charlie Hall have also seen success with and outside of the group. While the Passion band didn't necessarily start the modern worship music movement, they were definitely on the forefront. The group has released a live worship album nearly every year since their inception -- 2009 and 2001 are the only absent years (but 2000 had two releases). After 19 years, you pretty much know what to expect from this group of worshippers, but 2016 sees a change. The group has always thrived off of the live setting, but Salvation's Tide is Rising is actually a studio release.

While worship groups like Bethel Music and Hillsong have been releasing studio music for years, Passion has not ventured into the studio since 2000's The Road to OneDay. Salvation's Tide is Rising gives an interesting take on the group's music. In a studio setting, the songs have a set structure, while the live tracks can meander a bit. While it's perfectly normal and acceptable for a worship band to play songs longer given the Holy Spirit's movement, that same movement doesn't usually translate well to an album. The songs tend to be longer and worship leaders looking to use the songs in their own congregations have to decide what parts to remove from the live worship album to make the song work for corporate worship. On top of that, the studio allows for bigger and better instrumentation; perhaps even more overall creativity.

Musically, the songs are what you would expect from this group. There are no wild changes or experimentations, but the music has a slightly cleaner feel. Lyrically, Passion keeps it fairly status quo as well. The album is full of easy-to-sing songs with lyrics that are scripturally sound, but not very far reaching. In many instances, you can guess portions of the upcoming lyrics based on the words sung prior. While not as creative as some worship artists, it does make the songs a premium for corporate worship. "Salvation's Tide" is a pretty solid opener with Kristian Stanfill leading the way, but even better is the David Crowder-lead "My Victory." Other tracks that are pretty solid, and ready for your church worship service, are "Remember," with Brett Yonker, and "Simple Pursuit," featuring Melodie Malone. This reviewer's favorite track, however, is Crowder's second venture, "All We Sinners." Crowder continues to be the most adventurous member of the Passion crew. The album closes with Kristian Stanfill leading in a cover of one of last year's most popular songs, "Good Good Father." While Zealand's rendition is a more enjoyable listen (Yes, that's a matter of personal taste), Passion does a respectable job with the song. The group will undoubtedly add to the popularity this song enjoyed last year.

After 19 years, I find myself in a catch twenty-two with Passion. I know exactly what to expect and there will be no straying from the line, but what I get, especially as a worship leader at my church, is an album with several songs ready to be inserted into my church's worship service. The songs will unquestionably be receiving radio play and introducing them at a church service is a breeze. Giving Salvation's Tide is Rising the studio treatment was an excellent decision. The album is produced superbly and Passion has probably never sounded better to the ears. Unfortunately, the safe songwriting practices don't make it stand out as much amongst other worship artists who have excelled recently. Much respect is given to Louie Giglio for putting together this phenomenon that is Passion. On top of that, artists like Chris Tomlin and David Crowder, who have found major success in their solo careers, also keep coming back. The 268 Generation definitely appears to have their hearts in the right place and their newest effort is one of the better albums since their inception.