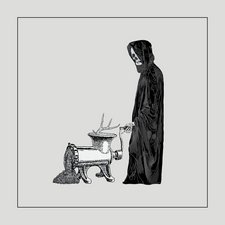 
It's been said that all good things must come to an end. Of course, "all good things" is debatable, but "some good things" is definitely true. Case in point, the legacy of a band called Showbread. Nearly twenty years after starting as a young, local church worship band, Showbread is calling it quits with their pièce de résistance, Showbread Is Showdead. It's a sad moment indeed, but the guys are going out in grand fashion. Not only have they released a feature-length documentary and their long-awaited Cancer movie on the same day as the album, they've also given us something that longtime fans have [secretly] wanted for many years.

When Showbread initially signed with Tooth & Nail Records, they gave us an album that was very much like what they had been releasing in the independent scene, albeit with more focus and a somewhat cleaner sound. In 2004, No Sir, Nihilism Is Not Practical changed the game for fans of emo and punk rock; it was seven guys (which included dual vocalists and a keytarist) pummeling the listener with shrill, desperate screams, warbly and robotic synthesizers, and punk rock galore. Of course, the band's sound and line-up evolved with each album, and each album truly was excellent, but some fans weren't fond of it, as the band purposefully never released another Nihilism. But, before giving up, Showbread is giving in, with another Nihilism-esque sounding album. And it's glorious.

Now, when it comes right down to it, Showbread Is Showdead sounds a lot like Nihilism, but it really takes cues from each album since then as well. Snake metaphors are used constantly, a la Age of Reptiles; "Harry Harlow and the Monkeys of Despair" is brash and dark, like Anorexia/Nervosa; "Legacy of Skubalon" sounds like a brother to The Fear of God's highlight "I Think I'm Going To See You;" "Life After Life After Death" features the milder alternative sounds of Who Can Know It?; and "Raw Rock Theology" and "Dear John Piper (Stillbirth In Space)" are both reminiscent of Cancer's controversial, yet unashamed, theological and counter-cultural attitude. Interestingly, the line-up for this album also features various band members from each of these eras. It's truly Showbread in all its forms.

As I mentioned, Showbread is solid in all its forms. From the versatile concept albums to the straight-forward punk rock and laidback style of Who Can Know It?, they can do it all and do it well. But Showbread Is Showdead truly takes the cake. The album gets started with the stunning "I Am Horrible At Processing Rejection." Be prepared as soon as you hit the play button, as vocalists Josh Dies and Ivory Mobley apocalyptically shout "Let's ruin everything, everything gets ruined, everything!" It's a tongue-in-cheek reminder that it's all over, and it's even slightly depressing, as they scream "I'm at the bottom of the bottoming out, and no one knows what I'm talking about." Intensity reigns in tracks like "January 3, 1889: Nietzsche Witnesses the Flogging of a Horse" (the ever-changing structure of which reminds me of "Stabbing Art to Death") and "Harry Harlow and the Monkeys of Despair," which is a no-holds-barred attack on industries that brutalize animals to make their products and get rich. Other tracks incorporate a dance rock feel of sorts; the grimly-titled "Why Shouldn't We Kill Ourselves?" has a very danceable groove (I wouldn't play it at a party, though), and it's one of several tracks that, for the first time in Showbread history, feature female vocals. Friends of the band, Whitney DePaoli and Loni Evans, come in for this and a handful of other songs, while another woman named Luisa Noble joins them (as well as a man named Matthew Zigenis) for the final song. Another friend, Bethany Allen, who you can see in the Cancer movie for a brief moment, provides a short monologue on "Dear John Piper," quoting David Bentley Hart's The Doors of the Sea about the idea of predestination and limited atonement. Though I feel Allen over-delivers just a bit, it's a very appropriate addition.

Showbread has always been one to push the envelope with their lyrics, having no fear in discussing their beliefs in a world that doesn't really want to hear them. "Dear John Piper" is a perfect example. There's a theology within the Church that teaches that God predestined people's entire existence before He created the universe, including setting up people's lives in a way that will lead them to Hell, and giving them absolutely no chance of salvation, all to prove His sovereignty over all things. John Piper is one of the bigger voices today on this theology, and Showbread pulls no punches in blasting down these ideas. They believe that this idea of God turns Him into a monster who forces Himself on people, either with irresistable grace, or inescapable wrath ("God goes strolling through the nursery playing Duck Duck Goose, appointing babies for destruction and they just can't refuse, sovereign, all-controlling God who pushed over man, You set the table for our failure, You put the fruit in our hands"). It's a call to re-evaluate what the Bible really means when it talks of predestination. Additionally, as I mentioned earlier, depressing lyrics do surface occasionally; there is surely a degree of appropriateness to them, but it can also be hard to listen to. "Legacy of Skubalon" is of particular note; first, "skubalon" is a Greek word for "refuse" or "excrement," and is usually used when referring to animal feces. Later, near the end of the song, Dies says "There's no silver lining, there's no clouds at all, just an endless sea of gone, that echoes on and on." The very last song, "Life After Life After Death," is a song Josh wrote for his son. It's meant to tell him about how harsh the world is, but that it's something he must go through. Josh laments over the trials he's faced, including seeing friends and loved ones leave their faith behind, but overall, and through everything, he does not fail to mention the love of Christ, even ending the song with a charge that applies even to us as listeners: "Follow Jesus with your heart, love Him every way."

At the risk of editorializing, it's slightly depressing that we seem to lose good rock bands on what seems like a yearly basis. The last few years have been pretty rough on Showbread, with financial troubles and a movie that kept them from doing tours and probably another album or two, so it makes sense that the guys feel the need to lay it to rest. And they've chosen to do so in a way that should make their fans happy, considering the circumstances; not only with a fantastic line-up prepared to do some final shows, but with a truly remarkable album that is, arguably, their best effort. Some will love it, some will hate it, some will question it and fight about the lyrics. But Showbread Is Showdead is a stellar way to end a bizarre, yet amazing, career in the music industry. Raw rock will kill me forever and ever. Amen.

On their final album, Showbread is going full circle by returning to the chaotic blend of pop/punk and hardcore that made Nihilism so loved by fans. Trade-off screams between Josh and Ivory, sharp and melodious synthesizers, gritty baselines and shredding guitars are all on full raw rock assault. Even though the music is in your face it is still ridiculously catchy--"I Am Horrible At Processing Rejection" and "My Shadow Is A Bat" are prime examples of this. The only weak link in this formula is the screaming. Josh Dies and Ivory Mobley both have a screeching scream that, though distinguishable from each other, is persistently monophonic. Because of their intensity, it is effective in small doses, but since at least 65% of the vocals on Showbread Is Showdead are screamed, the songs tend to blend together vocally. This isn't too much of a setback though because the rest of the band personalizes each song with dynamic transitions and details. And these eleven tracks are remarkably different thematically as well; throughout the record you'll hear Josh call out comfortable American Christianity ("Raw Rock Theology"), declare disdain for Calvinist theology ("Dear John Piper"), and pour his heart out about how much he desires to see his son grow up to pursue Jesus ("Life After Life After Death"). As always, the lyrics are thought-provoking, but the striking one-liners that were most powerfully communicated on Cancer aren't quite as profound here. In the band's swan song, the title track, Josh wrestles with his own pride, feels disheartened about friends who turned away from Christ, and wallows in the pain of those around him. Despite the gloominess, Josh reiterates the message the band has been conveying throughout their career: love Jesus and follow His calling. Showbread may be showdead after 2016, but their raw rock will kill forever and ever. - Review date: 1/11/16, written by Christopher Smith of Jesusfreakhideout.com

Death is the unfortunate, inevitable destination of us all. When it comes, it always feels too early. Such is the case with Showbread's final record, perfectly titled Showbread is Showdead. Returning to the hardcore sound of their major label debut, No Sir..., the band has crafted an exceptionally enjoyable release, containing some of the most unrelentingly violent songs of their career. Though the barrage of screams can be overbearing at times, this record is just plain fun. If you've been a fan of the band in the past, or have been an avid follower since the beginning, Showbread's final hurrah is one you'll definitely want to hear. - 1/13/16, Lucas Munachen of Jesusfreakhideout.com