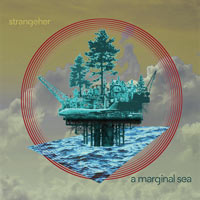 Strange Her
A Marginal Sea


The Alabama natives that make up the rock band Strange Her have been holding their own in the independent scene for a few years now. In an interesting and exciting turn of events, youll be seeing the band members on the big screen as they play the roles of Jeremy Camps band in the upcoming biopic I Still Believe. On top of that, Strange Her has a brand new studio album on their hands, and its quite good.

Strange Her has a way with writing solid indie rock songs with catchy and oftentimes memorable melodies and hooks. Songs like Matriarch of Manhattan and The Scarlet Cord often pop up in the back of my mind, and occasionally its not even the lyrics, but the melody that comes up. The band takes minor musical cues from bands like Brand New, Valleyheart, and My Epic, with a little As Cities Burn for good measure. That being said, itd be a stretch to call Strange Her a copycat of any of these bands; they just exist in the same vein and they do it well.

Just to be clear: if the only thing you know about Strange Her is of their involvement with the Jeremy Camp movie, you might not know what youre getting into, because A Marginal Sea is very tonally, lyrically, and stylistically different than anything Camp has released. It isnt designed for AC radio stations, and the songs are actually pretty bleak. Strange Hers lyrics deal with the darker side of life: depression, anxiety, addiction, hopelessness, etc. While theres not really any sense of hope or solution to any of these problems offered in these songs, such as the blood of Jesus (though the closing track, Speaking of Alan, does present a longing for rest in our eternal home), the band is also careful not to glorify any of them either. A lot of the songs seem very personal in this regard, but theres also some allusion that still fits in the albums context, like Modest Drinker. This song is sung from the perspective of a man lost to his addiction and bad choices, a man who is the example, used to scare kids out of Hell, spread my name like a cancer, itll mean more as a cautionary tale. The chorus of the song is an all-too-relatable feeling for those losing the battle with sin: And Im never gonna stop myself, Im not in control and I never was, Ill destroy us both before I ask your help, Im nothing if not proud of the damage Ive dealt. In short, thematically, the album is rather dark, but its an excellent example of the things that people, Christian or not, struggle with.

Strange Her isnt a newcomer in the music world, but they are slept on and under appreciated. A Marginal Sea is a strong album that could lead the band to bigger things. I wouldnt be surprised to see them sign to a label in the near future (like Tooth & Nail or Victory). Make sure to give them a listen, as the album is available now.