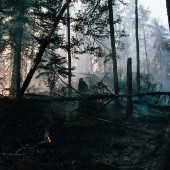 
A sombre image of the aftermath of a forest fire is what introduces listeners to Whale Bones' latest project, Island Fire. Like the cover art itself, the music therein is mysterious, aggressive, and serene. Whale Bones, the brainchild of vocalist/guitarist Nathan Kane, showed massive potential back in 2015 with the release of their E.P. The Seaside. They played around with a mixture of alt-rock and emo that, although heavily influenced, demonstrated that the band had a firm grasp of their craft. Island Fire takes their sound a step further as it introduces elements of post-rock and hardcore (think The Classic Crime) to their musical palette. The record was also produced, written, and recorded independently which is an impressive feat when taken into account just how pristine the record sounds.

The titular track opens the record with a slow, dramatic build that paves the way for Kane's commanding vocals. The guitars swirl around a delicate melody until they explode into a gorgeous post-rock crescendo. This leads to the album highlight, "I'll Try." It continues to build upon the momentum of the previous track before giving way to a beautifully anthemic, almost angelic conclusion, that shouts "I say I'll try, but I take my time. I was wrong." Spread throughout the tracklisting is a number of punchy, alt-rock songs. Among the best of these is "Inaction" which has an infectious, pop-like sensibility. On the other end of the scale, "Backyard" is a delicate highlight with an acoustically led first half. I would have loved to hear the band strip back their sound elsewhere because it's arguably the best moment on the entire record. With that said, the back half of the track is fantastic as well.

"Once Bitten," "Desperate Lie," and "Reciprocation" are heavier tunes that bring the record into a slightly more atmospheric ground. The post-rock elements are present but here is where we get into Island Fire's biggest drawback. The aforementioned songs, including the two instrumental interludes, struggle to be anything compelling. This is somewhat remedied by the album's concluding cuts but the middle stretch lacks any real standout moments until the aforementioned "Backyard" changes things with its softer approach. Without a captivating melody or a real sense of atmosphere, the risk of ending up with a song that borders on being insipid is far too great. The band takes that risk one too many times here but experience and growth will only serve to remedy that sooner rather than later.

Island Fire is an ambitious project and like such releases, it can be a little rough around the edges. Considering the amount of time the band has had to grow in this case, it is hardly a weighty criticism. It's a record that is well worth checking out if you're a fan of artists in the vein of The Classic Crime, From Indian Lakes and Manchester Orchestra. They cover a style of music the Christian market really hasn't heard much of and, although any kind of spiritual content is sparse, I hope we'll continue to hear more artists in the industry experiment with this sound in the future. Needless to say, Whale Bones are on the right track.