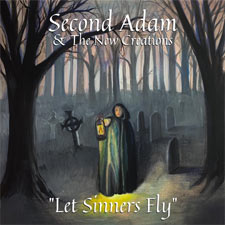 
Indie rockers Second Adam & the New Creations are an offshoot of a church ministry for a college outreach event way back in 2014. The band started by covering bands like Ascend the Hill, Citizens, Modern Post, and Kenosis before writing their own material. The New York-based band released a four-song EP (Able to Enable) in 2015. After that, other life events took the front seat and put new music on the back burner. However, now in 2022, Second Adam is back and finishing up their debut full-length album, Pilgrim's Progress. The first single from this release is "Let Sinners Fly."

The first thing you notice is that moody indie/alternative rock sound is back, but the production is better this time around (not that it was bad for the original EP). In particular, the guitars sound thicker and that really works for this sound. Fans of the indie rock sound should definitely be on board with the musical side of Second Adam & the New Creations. Vocally, things are spot-on as well and sound perfect for the genre. Lyrically, "Let Sinners Fly" is Christ-centric and talks of Jesus drawing sinners to Him. "Oh change these wretched hearts of our and give them life divine. Then shall our passions and our powers, oh Lord, by thine" is the refrain sung in the chorus.

This first single is a great step for Second Adam & the New Creations after a seven-year break. The music is great and still relevant today. I'm certainly looking forward to hearing more of Pilgrim's Progress, and fans of this type of indie rock should be following this band. 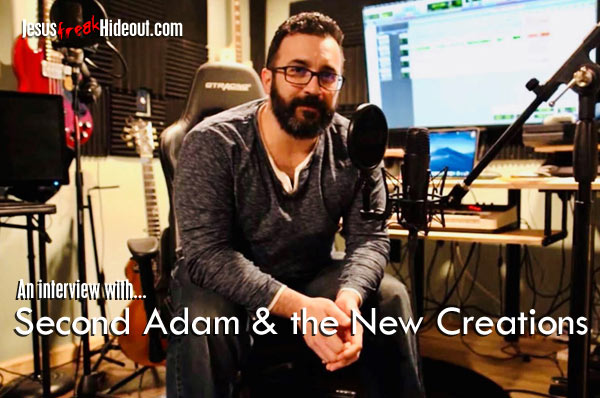 Abram Germano: Family and my career have kept me very busy since the release of "Able to Enable." It's crazy to think how fast time flies by. Both my children are now in double digit years, my wife graduated with her masters in Nursing and is now a Nurse Practitioner. I've recently transitioned from a construction company I've been with for almost 20 years to a better opportunity in the same field, which is a huge change for me. I've been leading the worship at my local church and one song on the album, "Deliver Me", actually has made it into some corporate worship services.

Abram: I'm planning on having Tim Smajda play the keys for "Cool and the Flame," but other than that, all new collaborators for the production of Pilgrim's Progress. Siennah Yang played the piano on a few tracks, the flute on "A Sinner's Lament" and Josh Kim laid the drum track for "Deliver Me." Everything else on this album has been an online collaborative effort between myself and Clint Campbell from Surrender Studios. He's been great to work with and I look forward to creating more songs with him in the future.

Abram: A few other bands come to mind, like Rivers and Robots and Bellarive, but I think My Epic has probably inspired me the most since I started this project. They combine great talent with songs that often carry significant theological weight to them. That's what I want to do with my music. I want there to be high quality arrangement, performance & production but even more important to me is that my songs contain sound doctrinal truths that resonate with God's people.

Abram: I almost lost this song, but when I found the old demo I had of it, I just fixated on getting it out first. It's a timely prayer. Think of the work "fly" in the song as synonomous with the word "repent" and you'll get the sense of it. Essentially, I'm asking God to grant the people in my nation, myself included, repentant hearts that he might turn and have mercy upon us.

Abram: I've decided to release 1 song per month until all 8 songs are released. All of them should be released by March of 2023.

Abram: Currently, this is a solo project but I do pray God would send some like-minded "New Creations" my way interested in playing and performing Second Adam & the New Creation songs live as a band.

Abram: I've had some dark spiritual valleys to trod through and I think the album art for the upcoming "Pilgrim's Progress" release speaks to that. The Pilgrim in the cover art is seen walking in what could be described as a valley with deathly shadows but he has a light to guide his path. God's word is the light for the pilgrim, to guide his path. The word is a firm foundation when all else is shifting sands. God has taught me that not much grows on top of the mountains, but much growth is found in the valleys. I hope this journey I'm on bleeds through in my album and I pray it is a blessing to me.