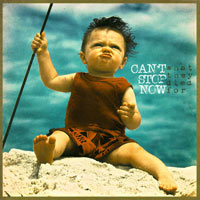 What They Died For
Can't Stop Now


Though it's existed for the better part of a decade, the New York rock band What They Died For is still a bit of a fledgling outfit. In the half decade since their last release (which was also their first release), the band has seen members come and go, but they finally settled on a line-up to write and record their first full-length record, Can't Stop Now. Musically, What They Died For takes the listener back to the days when rapcore was king (or was at least trying to usurp the throne). The band's blend of rap, rock, and hardcore easily brings to mind the old Bettie Rocket Records group CR-33. If that name doesn't ring a bell, you'd probably be more likely to hear shades of Rage Against the Machine or Limp Bizkit when listening. "Comeback Kid" is a terrific example, particularly of the latter comparison, with heavy riffs and in-your-face vocals that sound quite a bit like Fred Durst. Where they mix it up, though, is with some harsh screaming peppered in here and there. The Rage sound also makes its way into the lyrics, as the band focuses a lot on the issues within our culture, except that it's tackled with a Christian worldview here. An especially jarring track is an interlude called "Sounds of America," which features a large number of soundbites of people talking about how they don't need God in their lives. This is contrasted with bites of newscasters reporting tragic news and different people screaming "Oh my God!" in intense and frightening situations (be advised that there is one bleeped f-word spoken by a non-Christian person, as well as a use of "hell" out of context). This track is appropriately followed by "American Dream (Break Free)," a song that is meant to remind the listener of when America was more in line with a Scripture-based sense of morality and how much safer and all-around better it was to live here then. Musically, it's one of the album's heaviest offerings (just a little less heavy than the delightfully loud "Sticks and Stones"), with a sobering set of lyrics to match it: "Perverse generation, we've lost our way, and all these walls are caving in before my very eyes, I can see this kingdom fall that was built on the Scriptures, yet nobody believes me man, nobody believes me, just living in apathy, kick God out our schools, off our money, out our lives, but please invite Him to my funeral." What They Died For is a wonderfully talented band, with a collection of songs in a dated genre that still sound pretty good even in 2018. A cursory listen might cause you to write them off entirely, but you'd be missing out on quite a bit of solid music. Ultimately, I'd love to hear the band focus less on rapcore, as I found myself enjoying the hardcore elements a lot more, but regardless, they've piqued my interest enough to keep my eyes peeled for any new music they might release in the future.
- Review date: 12/21/18, written by Scott Fryberger of Jesusfreakhideout.com