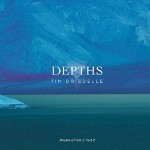 Starting your recording career with a two-part project is ambitious, to say the least. But that's what Tim Drisdelle is doing, starting with an EP called Heights in late 2016, and following with this year's Depths. Usually, a two-part EP project with only four songs apiece would be enough to make someone ask why the artist didn't just make one full-length album. But it's clear that Drisdelle had a concept in mind; a concept aiming to remind us that Jesus is with us in both the good times and the bad; the heights and the depths. Depths appropriately starts with a song called "How Deep." Bringing Psalm 139 to mind, Drisdelle recalls the endlessness of God's love, which is able to reach us no matter where we find ourselves. The song features a driving dance beat with a hint of dubstep, giving the listener a taste of something new from the artist. The exploration of genre continues in "Changes," which dabbles in R&B and would even sound like a boy band ballad if Drisdelle incorporated any guest vocalists or even layered vocals. "Closer To You" mostly returns to organic instruments, creating an amalgam of sound with synth, piano, guitar, a thick bass, and drums. The sound of the song doesn't really leave anything to be desired, but there's something about it - something elusive - that seems less engaging than the rest of the EP. However, it's short lived, as "Still Standing" brings the R&B flavor back, and also brings some gospel music along with it. The song is down-tempo and reflective, but near the end, it breaks into a chorus of "Standing on Your promises" and almost turns into a Pentecostal revival. Part two of Tim Drisdelle's double EP project stands out as the stronger half, with more experimentation in sounds and styles in which Drisdelle seems very comfortable. Neither EP's existence is contingent upon the other's, so you can listen to whichever one first and they will still be enjoyable. Either way, if Drisdelle keeps up the quality work in future releases as he did with Heights and Depths, then he may have big things waiting for him. - Review date: 3/3/17, written by Scott Fryberger of Jesusfreakhideout.com