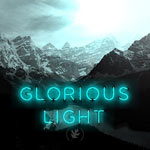 (the autumn) is a Pennsylvania duo with an interesting meaning behind their name. Autumn is seen as a season of change and the parenthesis represents the "internal." The idea is to represent the internal change we experience when the redeeming grace, love, and power of Jesus Christ touches our lives. The group began as an instrumental venture by Chris Shalter about 5 years ago, but Chris's atmospheric instrumental work soon morphed into an atmospheric style of worship music. In 2015, Ali Roth joined Shalter to add another dynamic to the sound with her fantastic voice. May, 2017 marks the duo's first full-length album, entitled Glorious Light. The album sets out to be different from the masses of worship artists and releases from a musical perspective. Shalter's atmospheric and airy touch certainly gives the album a different feel from all of the usual suspects. Sure, some of these songs use that sound occasionally, but it's usually used as filler between songs. (the autumn) do a really nice job of making it their entire sound. However, with the extremely long song lengths (ranging from about 4:30 to nearly 9 minutes), it does begin to wear a little thin -- especially with little to no variation in tempo throughout. The pair also knock it out of the park vocally. Chris has a great voice that is at times reminiscent of Dan Haseltine, while Ali just has a beautifully classic sound to her voice. Solos from each singer are great, but the harmonies are really on point. Beyond lengthy song run times, the biggest issue with Glorious Light comes on the lyrical side. While the lyrics avoid being too cheeky or cliché, they also don't come across as completely original or innovative. Perhaps, "In Awe" and "Strong in Us" are the biggest offenders. All in all, (the autumn) have put together a really nice album. If you don't get too bogged down with the track times, there is some really nice music to enjoy here, along with some particularly striking vocals. Glorious Light is a nice little reprieve from everyday worship tunes heard on the radio and should be enjoyed by those who love worship music. - Review date: 4/30/17, written by Michael Weaver of Jesusfreakhideout.com 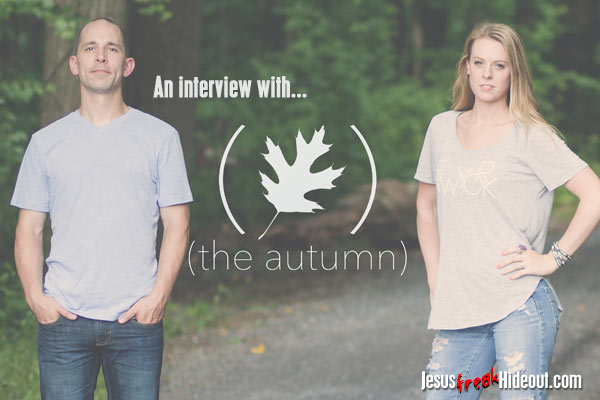 Chris Shalter: The path to (the autumn) started with the idea of not wanting to have the music tied to my name. It was just a personal feeling of mine that no matter if it was only ever me or if I had a band a multiple vocalists I wanted our identity to be wrapped around an idea and not someone's name. And so (the autumn) came from the idea of the season of Autumn being a time where we see change - as the old passes to make way for the new, which reminds me of 2 Corinthians 5:17 where Paul says, "Therefore, if anyone is in Christ, the new creation has come: The old has gone, the new is here!" And along with that, the parenthesis around the autumn are meant to represent that internal change as Paul speaks of in that passage.

Chris: Honestly, the reason I began writing instrumental music was because I felt really incompetent in any sort of ability to write lyrics. I knew what I wanted to say from my heart, but being able to articulate that in a way that didn't sound elementary or confusing was a very difficult thing for me. It wasn't until I started attending Lancaster Bible College for Worship and Performing Arts that I really started to understand how to cultivate lyrics into something that had depth, and could still be arranged in a way that was memorable and able to be sung by others.

Chris: Growing up I was (and still am) a huge fan of bands like Explosions In The Sky, The Album Leaf, Sigur Ros and so that really influences a lot of the musical writing in these songs. That atmospheric sound has always resonated within me and I love how heavenly or meditative it can sound.

Ali: We had started to develop a friendship through being on the worship team together, and Chris asked me to record some harmony on a song he had written for a mutual friend of ours. After that, I started helping out with other songs and the rest is history! We have been able to build a deeper friendship through this process!

Chris: Yeah, the song, "Strong In Us" was the first song I actually wrote lyrics to about three years ago and I felt like it needed a female lead. Ali was up for recording the vocals and from there we started our music partnership. Over the last several years since then we have been able to really grow in our friendship, which has been really beneficial in being able to be more comfortable bouncing ideas and songs off of each other and to be a Spiritual encouragement to each other.

Chris: I think for the most part our ability to harmonize with each other has just been something we've been able to do. Of course as we are writing and recording we find different ways to blend a little better, but over the last couple of years I feel like we've been able to get a good feel for how our vocals sound and how they best blend together.

Ali: My favorite song off the album is "The One Who Saves". I love the lyrics, the musicality and the emotion in this song. It has a mellow yet powerful feel to it. The words are well thought out, the melody is pleasing to listen to, and the dynamics in the song are so moving. I feel that anyone can connect to this song no matter where they are in life or what they're going through, and I think that's really important.

Chris: "All The Earth" is probably my favorite track on this album. It took me the longest to write and was the most challenging. I probably rewrote this song a dozen times and I shelved it for a while, too. I really wanted to create something special for this song that would represent the growing chorus of sound rising from the people of earth to God, which you can hear as the instrumental in the middle of the song as it builds into the final Chorus

Chris: I've been serving as a worship leader for a little over four years now. There are a lot of challenges in ministry in general, but one in particular for worship ministry is understanding your congregation, and knowing when something just isn't connecting with them. There have been several occasions where I have been really excited to introduce a new song to the church and it has fallen completely flat and I think that's OK as long as you have the awareness to see that and not try to continue to force it on them. Generally, when I introduce a new song, I try to sandwich it between two familiar songs and I also do the song several weeks in a row. The first week is usually not a good indicator as to how the song will be received, especially if it's not something that has been getting a lot of radio play and the congregation just isn't familiar with it. But after three weeks, you'll know if the song is connecting or not. And as much as I might really like to worship with a particular song, if it doesn't resonate with the majority of the congregation, I shelve it. By the way, as a side note, I am more than happy to provide chord charts to our songs for anyone who wants to learn them and lead with them. I understand why artists use CCLI, but I am also aware that not everyone has the ability or the money to access things like that, and rather than try to figure songs out on their own or search for someone else who has tried to figure them out, I feel they should have the opportunity to get ahold of some of these resources from the artists.