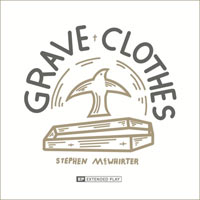 
With the kind of salvation testimony usually reserved for movies, former meth-addict now worship leader Stephen McWhirter has quite the story to tell. Formerly a member of the worship collective Iron Bell Music, he strikes out on his own to sing of the goodness of God on his six-song debut EP. Lead single and title track "Grave Clothes" has a Zach Williams vibe and would fit right among other songs like it on top 40 CCM radio. The message of leaving behind what is dead (grave clothes) to put on resurrection and the promised abundant life in Christ is the thesis of this EP and his life. It's a strong beginning that is quickly followed by "Belong To You," which was originally released by his previous group, Iron Bell, on their debut album, God Who Saves, in 2017. There is no discernible change to the song and it is easily the best overall tune of the tracklist, with "Grave Clothes" a close second. One of McWhirther's greatest strengths is his raspy and soulful voice. He puts it to great use on "Now I Know," a mid-tempo ballad with a simmer that is backed excellently by a gospel choir to great effect. Unfortunately, "Ever After" and "Falling In Place" suffer from a sameness that marks many songs of the worship genre. Though the lyrics are well stated, they slip into cliché, and the music fails to stand out in any real way after the strong beginning trio of songs. Even though songs four and five tend to blend, he does finish the album on a strong note with quality ballad "Nothing Is Too Hard" that features beautiful violins and gang vocals that passionately declare of the Lord, "Nothing is too hard for You, not for You/Mountains move and the dead still rise/Nothing is too hard for You, not for You/You part the sea and heal the blind." He's got the voice, he has shown some songwriting chops, and he has a story worth sharing. Though some work can be done in standing out musically, and reaching for less often used lyrics, there's a lot here to like. Here's hoping that Stephen McWhirter is here to stay with new music to encourage listeners sooner rather than later.
- Review date: 3/10/20, written by Josh Balogh of Jesusfreakhideout.com