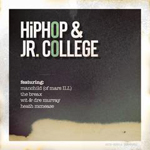 Chicago radio personality Seth Tower Hurd is writing a four-part book series with the first volume to focus on racial healing. Hurd pens his thoughts and experiences of playing basketball at a predominantly black college and what he took from those times. The ebook will be offered for $0.99, and this little EP is absolutely free and designed to give a bit of backstory of where he's coming from while featuring the artists who supported his first book. Titled Hip Hop and Junior College, the EP offers four hip hop tracks by some of the game's best spitters and three spoken tracks by Hurd himself. The first track, "Covered Up," comes courtesy of ManChild and carries a bit of a basketball theme while making note of the fact that balling and hip hop can easily bridge racial barriers. It's not MC as his best, but it's a solid joint with stellar production. The next two tracks bring on more good beats and showcase artists theBREAX, Wit, and Dre Murray laying down nice rap tunes and focusing on the cost of the cross and the consequences of poor life choices. Ending the EP is "Groundhog Day" by Heath McNease, and I'm simply not digging this one at all. The song is overly repetitive and musically not a strong one. The spoken tracks offer various personal topics from the author. He speaks of getting fired from his job, having a black friend over for Thanksgiving dinner with his all-white family, and two bands who never "sold out" their fan base. Each vignette paints a unique portrait of what the book will deliver. All in all, the EP is a short playlist that uniquely goes along with the upcoming book series. The music is pretty standard fare, and both those interested in the books or old rap heads may dig this release. However, if you're looking for some hip hop to play in your mp3 player for the next few months, this isn't it. - Review date: 9/27/12, written by Kevin Hoskins of Jesusfreakhideout.com