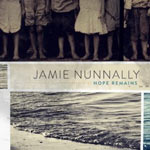 A humble and God-loving singer/songwriter from southern Georgia, Jamie Nunnally has written and recorded seven new worship tracks for his EP Hope Remains. The purpose of the EP was not to make a name for himself in the Christian music industry, but to give the Body of Christ some new songs with which to worship the Savior. With this in mind, Nunnally's music is such that it would definitely fit in to most contemporary church's Sunday morning worship services, so long as they don't mind a little southern influence in their music. Nunnally wouldn't easily be classified as country or southern gospel or anything of the sort, but his Georgia roots are apparent in the guitar tones, drums, and some of the melodies. It's only in small amounts though, as the majority of Hope Remains' music is rather comparable to radio staples like Jeremy Camp, Casting Crowns, Building 429, and more (not too surprising, considering Casting Crowns' Bryan Scoggin played the drums for this EP). Title track "Hope Remains" is the prime example of this sound, although the guitar playing and the strings remind me more of a band like MercyMe. Opener "Lord We Worship You" is an upbeat, contemporary rock song that simply longs for more of God's presence: "We don't ever want to get used to Your presence, so we seek You like the first time that we met you, with all our worship, all our praise." "Now Is The Time" is another upbeat, rock-based track, but Nunnally also has some slower material here, too. For instance, the closing track, which ends on a rather strong note, is a light, acoustic piece called "Selah." Nunnally sings over a soft guitar, but not with lyrics already written beforehand, but with spontaneity, as he pours out his heart and thoughts to the Lord as he records the song. Quiet as the guitar is, it can almost otherwise come off as a capella, but it's not hard to hear it as the song progresses. Those looking for some new songs to sing to Jesus will find just what they are looking for with Hope Remains. Though not the most eloquent of artistic of writers, Nunnally's focus on Jesus and his sincerity in the matter makes for some honest and heartfelt worship time. You might not hear his name on the radio anytime soon, but if you'd like something to add to your worship music collection, Hope Remains is worth checking out. - Review date: 10/9/12, written by Scott Fryberger of Jesusfreakhideout.com 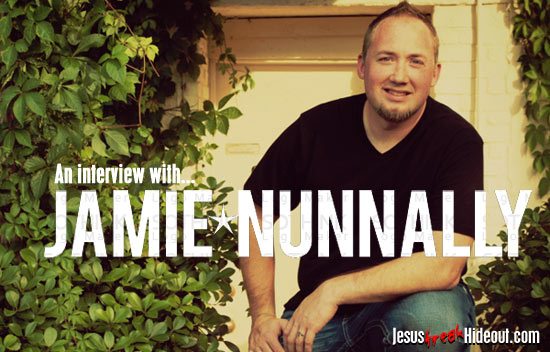 Jamie Nunnally: I'll never forget when I was a young teenager, I saw a video of a preacher who stared at the screen, pointed and said, "Don't grieve the Holy Spirit - He's all that I've got." I remember marveling at the intimacy between this speaker and the Lord. I was filled with wonder realizing how amazing it was that God - the creator of the Universe - was a relational being and wanted me to have intimate fellowship with His Holy Spirit. He not only loved me but He liked me and wanted to spend time with me. From that point on, I wanted to become sensitive to His heart and do those things that attracted His presence. These days, I can think of nothing better than to create worship moments for others where they too can come face to face with God.

Jamie: Actually, after watching that video I went up to my room and wrote my very first song called "Fall On Me." It was simply a prayer to the Lord where the chorus said "Holy Spirit fall on me/set me free/release Your power in me."

Jamie: My first instrument was the drums but I figured out pretty quickly that I'd have to learn something else in order to write songs and lead worship. I taught myself the guitar by studying a Beatles music book with chord charts over the words. I've been known to play around on the bass and keys as well. I lead worship on guitar now but the drums will always be my first love!

Jamie: I am committed to the local body and love serving at my particular home church. But there are several men's, women's and youth conferences and retreats throughout the year where I get to lead worship as well. One annual conference where I usually lead is held on a cruise ship. It's a tough job but somebody's got to do it!

Jamie: Oh man. Only 5?! I'm a rock guy so I Iove both newer rock bands like House of Heroes and classic stuff like King's X. As far as worship goes, Bethel Live (Brian and Jenn Johnson) and Rick Pino are among my favorites. Both are so anointed. I've always loved Paul Baloche as well - he has written so many corporate worship songs for the church and as a local worship pastor, I'm so thankful for what he does.

Jamie: I had around 20 songs to choose from for this EP and I'm not ready to let go of some of those that didn't make it. I'm hopeful that they'll appear on a future project. And I'm still writing too. God is always speaking and if we'll listen, there is no shortage of things He wants to say to and through His people.

Jamie: I'd heard some of Jason's production work for some other artists like Fee and John Waller and was really impressed. His studio was pretty close to me here in Georgia so I contacted him and a few other producers to see who would be the best fit. In the end, I just loved his enthusiasm and he really understood and supported my vision for this project. He was the perfect mix of fun and professional and he's an amazing musician, too. Having Brian play the drums was a nice surprise. I went to the studio one day to meet with the engineer and Brian just showed up. I was like, yeah, that'll work! He's a great guy and totally nailed the drum parts for the album. And as a drummer, I'm not always easy to please!

Jamie: Wow, man, how much time do you have! God is so good. Lately, He has been driving home the importance of just being with Him. Sometimes, I think we can get so caught up in doing things that we forget that we are called to sit as His feet and be with Him. We're human beings, not human doings and Christianity isn't something you do, it's Someone you know. It's so hard in our over-stimulated "iProduct" society to just find time to get in His presence and be still. But it's so important. Especially as a worship leader, I can't lead others where I haven't been myself and I can't give away what I don't have. My prayer lately is just to be as close to Him as possible and to experience as much of His glory as I can physically handle.

Jamie: I just pray that people are blessed by the music. That it draws them closer to the Father, and encourages them to keep pursuing Him with all that they are. No one has it all together and we all need help to stay strong in our walk with Christ. The greatest compliment I could ever receive is that these songs helped connect the listener and the Father!