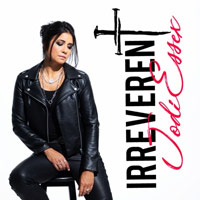 
Jodi Essex is a multi-talented singer/songwriter who, after spending some time with acting and comedy, has decided to take the leap into the world of writing and recording music. Her debut single, Irreverent, is a hard rock song that hearkens back to the 80s rock and metal days of Joan Jett and Stryper, but with more of an updated sound and some cleaner production. Though this style doesnt necessarily have mass appeal in 2020, Essex is able to take the classic style and make it accessible for todays listeners, which is no small feat. The song itself is fearless and full of attitude, as it draws inspiration from Essexs life of rebellion; though, instead of spearheading rebellion toward God, Irreverent encourages the listener to rebel against the world and its Godless ways. The lyrics aren't the song's strongest point; the bridge is a great example, saying, Not for the meek, brave and the bold / find all you seek, best story told / any press is good press in Him / fearless, take hold. Meanwhile, the chorus is honestly a little confusing: Irreverent for His presence / what you say? / youre going the wrong way / irreverent, in all the time spent / what you say? / you goin my way? But, regardless, the intended message is clear: follow the Lord and forsake the world. Irreverent is just the beginning for Jodi Essex, with another new single out now ("Stand Up"), and a full-length album on its way in the near future. So if you like what youre hearing here, be on the lookout for more.
- Review date: 3/9/20, written by Scott Fryberger of Jesusfreakhideout.com