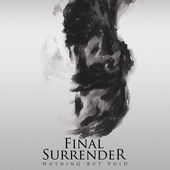 Final Surrender
Nothing But Void

Picture a five-piece metalcore band steadfast to traditional tenets of the genre: blast beats and shifting drum cadences layered with alternating guitar riffs, break downs, and vocals spanning from growled to screeched to sung. Sounds played out right? Surprisingly, in this case, it's not. Final Surrender are a quintet hailing from Bangalore, India, who, with their second album Nothing But Void, have infused enough musicianship and originality to remind the listener what made the metalcore band norm a norm. Simply put, it's enjoyable; So much so, in fact, that at its best moments it would not be too much of a stretch to draw comparison to the early releases of a current genre great, August Burns Red. While the maturity and execution may pale in comparison, the same inspiration and stylistic tendencies exist. Within Final Surrender's own career, Nothing But Void is a succinct offering compared to their prior release, Empty Graves, which dropped mid-2013. At only 7 songs with a total runtime of 26 minutes, the latter is almost exactly half the length of the former. However, it should be noted that this statistic becomes unsurprising once one recognizes the amount of cultural instrumental influence in the old that is largely absent from the new. All in all, Final Surrender could be a concise treat for metalheads tired of continuously crying "Play your old stuff!" at shows. If this sounds like you, check out Nothing But Void; it's as derivative and fun as an album comes nowadays. - Review date: 3/3/17, written by Jeremy Barnes of Jesusfreakhideout.com