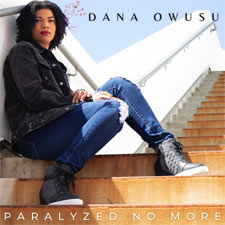 
Dana Owusu is an independent musician and native of St. Louis, Missouri where her collegiate athletic pursuits came to a screeching halt due to a deveatating injury. This life-altering event initially sent her reeling into depression, but a divine moment with God became the genesis of her debut single "Paralyzed No More." Just like her varied life experience in college athletics, the military and music, the tune is a fusion of her influences featuring a dash of R&B, hip-hop, and rock. With a strong voice akin to powerhouse vocalists like Beyoncé and Mary J. Blige, the song is a defiant declaration of freedom from grief and depression. Musically, the song begins with string stabs and piano before giving way to a crisp drum beat and crunchy guitars. I could easily picture this as the soundtrack to a pivotal scene in a movie. This track is a strong introduction to Dana, with additional music on the way in the form of an EP, titled Becoming. With such an explosive first single, the music has a tough act to follow, but with the talent already on display, I think Owusu will rise to the challenge. Overall, "Paralyzed No More" would be a great add to a upbeat playlist perfect for a workout or a pump-you-up-for-the-day jam.
- Review date: 10/5/21, written by Josh Balogh of Jesusfreakhideout.com