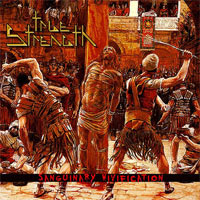 
Though it's not as much in the spotlight as it was in the 80s, heavy metal is still alive and kicking in various circles. And while the secular industry has bands like Iron Maiden and Dio, the Christian industry is getting its fair share with the likes of Deliverance, Narnia, and True Strength, who have a new album on their hands called Sanguinary Vivification. The album features nine songs that all really take their time getting to their respective destinations, having an average track length of around six minutes or so, with the longest track, "A Grave Among the Rich and Wicked," sitting at a staggering twelve minutes and twenty-five seconds. Sometimes this is a good songwriting technique, especially for story-based songs and concept albums. Unfortunately, most of the songs here aren't compelling enough musically to justify such length; usually the song ends long after it feels like it should have. The theme of the album is the highlight here. The album's title is a term that essentially boils down to "giving life through death," which is the overall theme, as each song paints the picture of the life and death of Jesus as seen in the New Testament Gospels as well as the Messianic prophecies found in the Book of Isaiah (many of the song titles are phrases found in Isaiah 53). The songs not only explore the death and resurrection of Jesus Christ, but also some of the characteristics about the Messiah; that He would be God with us, a man of sorrows, He would be put to death to cleanse us of our sins, and various other prophecies that were fulfilled by Jesus. Even a good portion of the lyrics are straight from Scripture. Sometimes this limits the melodies and makes some of the songs sound a little awkward, but the message is loud and clear and never-failing. True Strength falls into a very niche genre; its fans can be ravenous and hardcore, but that's because it's not generally a style with many casual fans. That being said, if you don't like the style of heavy metal played by any of the aforementioned bands--with grittier production, long instrumental sections, and high-range power vocals--this is not the band for you. Otherwise, Sanguinary Vivification is available now for your listening pleasure.
- Review date: 5/12/19, written by Scott Fryberger of Jesusfreakhideout.com