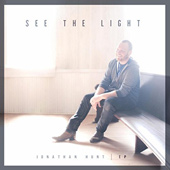 
Not long after winning the Local Music Project from Spirit 105.9 in Austin, Texas, singer/songwriter Jonathan Hunt began work on a new EP, which he released just this past month. See the Light is a mostly upbeat southern pop rock EP, with five songs showcasing just why he is capable of winning such a contest. The title track kicks off with a radio-ready, country-esque pop song that isn't the EP's strongest offering, but is still a good choice for the opening track. "Deliverance Song" has a more rock-oriented rhythm and structure, and even sounds a bit like something you'd get from Third Day; even Hunt's vocals have a vague resemblance to the powerhouse that is Mac Powell. The Third Day similarities are also present in the ballad "Oh Victory," and the closing track, "You Are God," brings out a praise-filled, gospel sound complete with a choir and some organ, as Hunt sings "Our guilt and our shame, our sin is washed away, lift your voice in victory, our God has won the day." My personal favorite, though, is the song that comes right in the middle of the tracklist. "Give It All" definitely fits in with the other four songs, with its southern flair and pop rock sound, but it's actually a lot more akin to the rock band Ravenhill. Hunt's vocals even change a bit, sounding the slightest bit grittier than in the other songs. As you may be able to guess from the title of the EP, Hunt's lyrics are uplifting and encouraging, such as in the title track itself: "See the light in the darkness, know the love that makes walls come down, find the grace neverending, feel the joy 'cause it's all around." It's a simple reminder that, when things are rough or life gets busy, sometimes we just need to rest in Jesus. If you're in need of some encouragement like that, and music ministers to your soul, you would do well to pick up a copy of Jonathan Hunt's See the Light EP, which is available now wherever you get music.
- Review date: 4/17/18, written by Scott Fryberger of Jesusfreakhideout.com