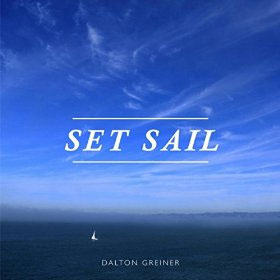 Dalton Greiner is a singer/songwriter from the Philadelphia area. He started off playing and singing in his parent's music ministry as a child and is currently the worship director at his church, Harvest Bible Chapel. Set Sail is Dalton's first album and it features songs based in scripture, with a couple coming directly from Psalms. The first thing you may notice as you begin to dive into the record is his voice. Greiner has a higher-pitched, nasally voice that could be an acquired taste for many listeners. A good comparison may be with Sean Curran of Bellarive. Musically, Greiner brings a sound similar to many modern worship artists. Piano, soft acoustic, and some well-placed overdriven electric guitars dominate the majority of the album. The lyricism is interesting and demonstrates a different perspective at times. The most intriguing song from a lyrical viewpoint is likely "The Shirt." In it, Dalton uses the metaphor of a shirt to describe how our soul becomes dirty and worthless, but he also offers hope when he describes a stranger who is willing to trade him an even brighter, clean shirt for his dirty shirt. "Lamb of Calvary" is also an intriguing track. Dalton remarked that the lyrics were written by his grandfather. Perhaps the most complete song, overall, on the record is "Still Waters." The track is based on Psalm 23. The keyboards, acoustic guitar, and lead fills by the electric guitar work very nicely together; the song particularly shines in the bridge. Overall, Dalton Greiner's Set Sail is a solid effort for a debut release. It's not without hiccups, the biggest adjustment coming with Greiner's extremely unique vocals, but there are some solid high points. Check out Set Sail if you're looking for some new music, or go worship with Dalton if you live in the Philadelphia area. You're sure to appreciate his fascinating perspective. - Review date: 1/4/16, written by Michael Weaver of Jesusfreakhideout.com