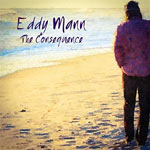 Eddy Mann is a singer-songwriter steeped in the Americana and folk traditions singer-songwriters are often associated with. Mann's newest release, The Consequence, is a follow up to 2014's Dig Love and trails in the same vein musically. While this is his newest album, Mann has been releasing music for quite some time and has numerous albums you can check out and purchase on his website. Mann also has some acclaim in his background as he's won awards for IMEA's Adult Contemporary Artist of the Year (2016) and Kindred's award for Worship Leader of the Year (2015). The Consequence is a soothing listen. The acoustic guitar and smooth electric licks blend nicely -- best showcased in "This Side of Eden." In fact, these electric guitar leads are the best parts of music in many cases; just listen to the jam at the end of "Evanesce." The album's title track is another of the top tunes available for listeners. Mann sings, "And I wanna be faithful in the struggle. And I wanna be the confidence. And I wanna be gentle in the suffering. I wanan make a difference; I wanna sway the consequence," in the song's second chorus. Mann has dedicated the album to his beagle, Molly, -- He's had her for 18 years! -- and the final track, "Howlelujah" is Molly's turn in the spotlight. (The seven-second cut is simply his pup Molly letting out a big howl.) Eddy Mann is a seasoned artist who knows a lot of tricks to making some enjoyable music. The folk stylings certainly won't speak to everyone, but solid production, excellent guitar parts, and good writing will definitely appeal to some. Fans of Americana and folk should definitely give Eddy Mann's The Consequence a listen. If you like what you hear, give his website a peak and grab something from his back catalogue. - Review date: 11/1/16, written by Michael Weaver of Jesusfreakhideout.com