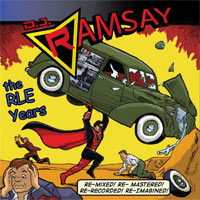 
Ramsayman is the musical product of long time singer/songwriter/musician, Darren Ramsay. As a fan of super heroes and comic books, Ramsay says the name Ramsayman is the superhero moniker he would use if he ever were a superhero -- drawing inference from Larry Boy, who used his own namesake in his superhero persona's name. Even the EP cover shows Darren's love of comics with his homage to Action Comics #1. Ramsay has been in several, and varied, musical ventures over the years. His project The RLE Years contains six songs from his late 90s band, Red Letter Edition (aka: For Deaf Ears, aka: Soap Box Incorporated). While The RLE Years is a lower budget project (even using some of the original tracks in places), it's still adequately mastered and fairly easy to listen to in its production. The EP definitely sounds like an alternative/hard rock album from the late 90s, but that's far from a bad thing if you're a music fan like me. The sounds are reminiscent of bands like Fuel who walked the line between alt/rock and hard rock -- and the melodies are quite good! "Jesus Doll" and "Yellow" bring a much heavier rock tone to the album, "When it Rains" and "Just Remember" has more of an alternative Dishwalla type feel, "You and Your Mandolin" is the quintessential ballad, and "Circle Round" is punk inspired rock and roll in the vein of Unwritten Law, or perhaps even Eve 6. While the music on the EP certainly brings to mind a sense of nostalgia, nothing can prepare you (90s kids) for the nostalgia to be found on the bonus track. Those who watched Ren & Stimpy will undoubtedly recognize the song from the in-show commercial for "Log." Ramsayman gives a barbershop quartet type of treatment to the song, which turns out to be a completely unexpected, but super fun, blast from the past. While the production isn't always top-notch, and some of the tracks sound a little muddy, Ramsayman's The RLE Years is a really fun listen from front to back. The favorites are easily "Jesus Doll," "Yellow," and "Circle Around." Fans of 90s rock should definitely give Darren Ramsay's project a spin. I know I certainly found myself enjoying the listen.
- Review date: 4/12/18, written by Michael Weaver of Jesusfreakhideout.com