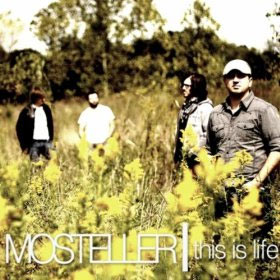 Mosteller
This Is Life

Composed of four worship pastors with a heart for ministry, Ohio contemporary pop rock band Mosteller has been creating their own tunes for about four years, fronted by guitarist and lead singer Justin Mosteller. Their first full-length record released this year, entitled This Is Life. The whole of the record has a ring of familiarity to it, resembling a lot of rock-based contemporary Christian artists that are ever so popular these days, like Jeremy Camp and Matt Maher. Tracks like the opener "Glorious Day" and "Remember" have the guitar lines and melodies that have almost become synonymous with "Christian music." Mosteller's voice reminds me a bit of singers like Chris Daughtry, which also helps a bit in giving the band a similar sound; later tracks on the tracklist like "Amazed" and "Yours" are fairly good examples, though the Daughtry comparison doesn't go too entirely beyond the vocals. Of course, music aside, the guys' hearts for worship and ministry flow straight into the lyrics. The title track has Mosteller singing about actually knowing real life after meeting Jesus and living in His love, while "Like Jesus" is a prayer to live like Jesus lived. You can really get a good glimpse into who they want to be in their faith, and the desire they have to ultimately please God with their music. This Is Life is good for encouragement and for worship, but musically it falls a bit flat (though the slower, southern-style "Rest," which features some organ and some banjo, does fair better than the rest, making it the album's highlight). If you hear them play at church or during a set specifically designed for believers to get together to worship God, they're going to do the trick. But if you're wanting something a little out of the ordinary, musically speaking, This Is Life isn't what you're looking for. - Review date: 6/9/12, written by Scott Fryberger of Jesusfreakhideout.com