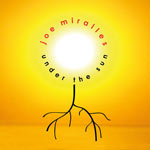 Joe Miralles
Under The Sun EP

For the better part of two decades, Pennsylvania-based singer/songwriter Joe Miralles has been honing his craft, writing and performing his own songs for varying crowds. Now, with a handful of albums to his name, Miralles has five new songs ready for his 2012 EP Under the Sun. It doesn't take long to get a feel for what Miralles has to offer here; just a few lines into opener "Under the Sun," you know what to expect for the rest of the EP. Under the Sun is a slightly-underproduced, 90s style singer/songwriter and pop rock offering. While Under the Sun spends most of its time treading the waters of the Goo Goo Dolls and Hootie and the Blowfish, "Do You Still Believe?" takes an interesting turn with the Billy Idol soundalike, "Do You Still Believe?" Though decidedly more pop-flavored than Idol, the vocals and music are a little reminiscent of the singer's hit "White Wedding." Miralles' voice isn't as strong as Idol's (not that Billy's is that strong to begin with), but it sounds a lot like it throughout the whole of the EP. Miralles' songs have varying messages: "Under the Sun" encourages standing for God's will in the face of hatred and adversity, but then "Lost You Somewhere" shows the singer coming to terms with the intentional loss of a loved one. It's nice to see his undying devotion in his lyrics, but also his humanity and openness with the things he's struggled with. The lyrics themselves seem fairly easily written, but they're wrapped up in catchy melodies. It's hard to say whether or not they're prime for radio, but if they aren't, they're certainly on their way there. After listening to Under the Sun, I can't say I'm too impressed, but I can say that I like Joe Miralles. His music is by no means bad, but it seems a little outdated and easy. He's obviously talented and has a passion for making music, though, and that can make for some good things down the line. If you like the Goo Goo Dolls or Counting Crows, check out Joe Miralles' Under the Sun, which you can stream for free on his Bandcamp. - Review date: 2/19/13, written by Scott Fryberger of Jesusfreakhideout.com