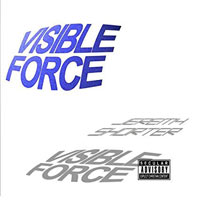 After the 2006 release of Strong Christian Overtones, Jeremy Shorter took a few years to release his next and, to date, latest album. After a few years of releasing albums on an annual basis to that point, including with a couple of different bands, this three-year gap between albums seems to have been one filled with some artistic growth. Visible Force still lacks the big, clean production, and the instruments again are mostly MIDI (very little of what you hear is the actual instrument it's intended to sound like), but the songwriting is tighter and sounds a lot more focused than the previous album's did. It's honestly pretty refreshing to hear more of a straightforward alternative rock sound with limited experimentation this time around. Strong Christian Overtones relied heavily on blending as many styles together as possible, but the process was simplified for Visible Force, taking away the distractions and focusing on Shorter's strengths. The songs still focus on the sinfulness of man in light of the holiness of God, and he uses a mix of worshipful lyrics, satire, and humor to get his points across. "A New Family Tree" is a bit of a quirky song (something about it reminds me of They Might Be Giants); the song takes a look at our inherent sin, passed down from Adam, but ultimately displays thankfulness that, through Christ, we have a new family tree, and our sin is no more. "JC+R+SoG+HL=TLW" is one of the more bizarre song titles I've come across, but the equation (which is spelled out in the chorus) is one that points to the all-sufficiency of Christ. And if you give the album a full listen, make sure to stay for the tongue-in-cheek infomercial style closing track. There's a lot to dissect in this 14-track album. It's clear that there's still a lot that can be improved upon in any potential future release, but the noticeable growth between Visible Force and its predecessor is a good sign that Shorter is an artist that seeks to make each new project better than the one before it. Additionally, I'd love to hear the use of real instruments. Shorter admits to not really being able to play many instruments, but calling in some studio musicians for the recording sessions would go a long way. If we do get a new album from Jeremy Shorter in the future, I'll be genuinely interested to hear it.