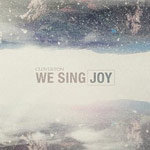 With humble beginnings as the worship team at a small church in Manhattan, Kansas, The Lance Stafford Band - now known as Cloverton - got a chance to spread their music to a broader audience when they were picked up by nationally-syndicated radio station K-LOVE/Air-1. They followed it up with a tremendously successful Kickstarter campaign and the following full-length album Patterns last year. And this year, the band is back with a six-track Christmas EP entitled We Sing Joy. Christmas albums are a big (and lucrative) thing in the Christian music industry; much like worship albums, carols are recycled and rehashed in abundance every year. The problem with this is that many bands that do it don't even bother to try anything new with it. The main strength with Cloverton's offering lies in the exact opposite. These are all familiar Christmas carols, but Cloverton takes strides to make them at least somewhat original, mostly in re-writing the melodies for several of them. Had I not known a decent amount of the lyrics for "What Child Is This," I may not have even recognized their version of it. Completely re-arranged, Cloverton's melody for this song briefly brings to mind the cover of "Mad World" by Gary Jules and Michael Andrews (if only for a moment). "We Sing Joy (Joy to the World)" is another example, though the vocal melody sounds like it's in a different time signature than the music, and, as a result, sounds a little offbeat. It's a little difficult to get past, unfortunately, as is the overwhelming autotune and over-accentuation of certain sounds and syllables in "Silent Night." However, the rest of the EP is fairly strong. The intro "Arrival" leads perfectly into "What Child Is This," the newly-written verses for "Do You Hear" fit in very well with the rest of the song, and their rendition of "I Heard The Bells" is very accomplished. The band has a catchy pop rock sound akin to Building 429 or Third Day, and is willing to experiment with the sound, which will certainly come in handy as they continue to grow and write new music. We Sing Joy is far from the strongest Christmas offering I've heard, but it has a few charms on it that you might like to add to your holiday playlist. - Review date: 11/17/14, written by Scott Fryberger of Jesusfreakhideout.com