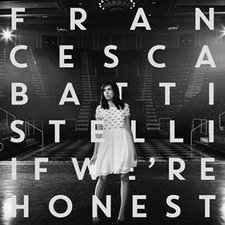 If We're Honest
by Francesca Battistelli

Everyones telling you / To let go of what youre holding to / Its too late, too far / Youre too small, its too hard // Throwing water on that spark / Living deep inside your heart / With oceans of reasons / The things youre not seeing // But oh, maybe they dont / Know what you know / That youre not alone // CHORUS: Dont you be afraid / Of giants in your way / With God you know that anythings possible / So step into the fight / Hes right there by your side / The stones inside your hand might be small / But watch the giants fall // We could really live like this / Cant you imagine it / So bold, so brave / With childlike faith // Miracles could happen / Mountains would start moving / So whatever you may face // CHORUS // Ask and believe / Youre gonna see / The hand of God in every little thing // CHORUS // Miracles can happen / Anything is possible / Watch the giants fall

Behind the Song:
This song began with a 14-year-old girl named Mallory. When she was 11 she started an organization that has raised over $20,000 to help children in Uganda. Shes an amazing girl who had a vision to do something for the kingdom of God that was bigger than herself. She reached out to me about singing at a benefit luncheon, and in her email, she said, People are telling me Im crazy to even write you, but if Ive learned anything the past few years, its that God is able to do so much more than I could ever imagine if I would just step out in faith and ask. I was so moved by her faith that a few days later I wrote this song for her (again with Jeff Pardo and Molly Reed). The song is a reminder that no matter how small the gifts or talents you are holding in your hands might seem, if God is able to use a tiny stone to make Goliath fall, He can do absolutely anything. All it takes is mustard seed sized faith. - Francesca Battistelli