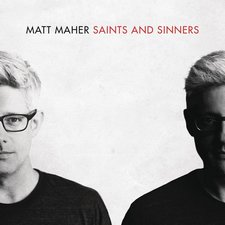 Saints and Sinners
by Matt Maher

Where there is hatred Lord, let me sow your love

Are we giving up, fighting the good fight

Where there is despair, just a flicker in the flame

Could break the veil of night

To the Father and the Son

And the Holy Spirit, three in One

I offer you myself, though Im broken and spent

Let me be Your instrument

May I never seek, to be consoled as to console

May I understand, to be loved is to love

I offer you myself, though Im broken and spent

Let me be Your instrument

Let there be peace, pardoned in the pardoning

Born again when we die, You have raised us to new life

Behind the Song:
The prayer of St. Francis is a huge source of inspiration in my life. It's such a simple and beautiful prayer. It was written in France and attributed to St. Francis because it seemed to have his character and the dynamic of his spirituality. 'Instrument' is my way of weighing in on a lot of things that are happening right now. the chorus is inspired by the song that St. Francis actually did write, which was 'All Creatures of Our God and King,' in which there is a reoccurring link that says, 'Oh praise Him.' Jon Foreman has always struck me as a St. Francis type person in the sense that he's a man who has universal appeal as an artist, and he and St. Francis both have been advocates for peace. Obviously, Switchfoot has tried to use their platform in major ways to talk about peace and to promote a less combative relationship between church and the world. So it seemed fitting that Jon and I collaborated about this song together. - Matt Maher