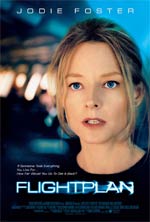 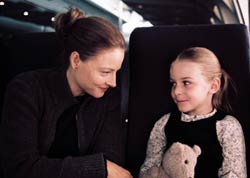 On a plane at 40,000 feet, Kyle Pratt (Foster) faces every mother's worst nightmare when her 6-year-old daughter, Julia, vanishes without a trace in mid-flight. Kyle desperately struggles to prove her sanity to the disbelieving flight crew and passengers while facing the very real possibility that she may be losing her mind, as all evidence indicates that her daughter was never on board. Kyle can only rely on her own wits to solve the mystery and save her daughter...
(from MovieWeb.com)

Tis the Summer for airline-related thrillers apparently. Following just a month after the release of Wes Craven's Red Eye, the Jodie Foster vehicle Flightplan charters its way into theaters. Coming off as sort of a hybrid between last year's The Forgotten and pretty much any kind of paranoia-driven thriller, Flightplan is a tense and entertaining film. Of course, that doesn't mean it's perfect though.

Jodie Foster is a highly talented actress who can excels at playing dramatic and often desparate roles with sincerity and intensity. While there may be some moments in Flightplan where she treads into over-the-top territory (or perhaps it just starts to get a bit old or obsessive with her relentless "where is my daughter?" bit), Foster is pretty much our girl for getting the dramatic job done.

Peter Sarsgaard, who is an underrated actor, normally notable for smaller roles, is very good here as the airplane's air marshall. His performance may also be a bit much at times, but he plays most of the part with enough charm and believability. And it was great to finally see the always reliable Sean Bean play a good guy for a change. Bean is given a chance here to show some heart in his authoritative role as the plane's captain. 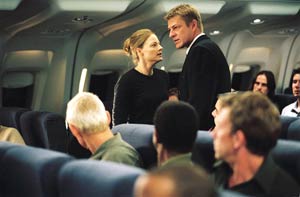 The film is a reasonable hour and a half in length and keeps the audience guessing for pretty long whether Foster's Kyle really is delusional or not. Some plot elements that unfold may have some viewers scratching their heads as to their practicality, but in the framework of the thriller at hand, it works well. The film also offers a decent, although not especially jaw-dropping, twist at the end. It may not be as hokey as The Forgotten either, but it makes for good entertainment nonetheless.

In comparison with Red Eye, I'd have to say I enjoyed that film more. The interaction between the leads as well as the acting power seemed to make the film stronger than Flightplan. Because of the mystery in this film and a resolution that may disappoint those looking for a Shymalan-style psychological twist, the payoff may not be enough. Red Eye was a more straight-forward thriller that relied on the terror the female lead experiences from the villain throughout the movie. With Flightplan, we're left on the edge of our seat to wonder what to expect for the majority of the film. In fact, it may be drawn-out to somewhat of an excess in that case, but not enough to hurt the enjoyability of this film.

As far as content goes, there's some violence, mostly nongraphic, with the worst resulting in a red abrasion on Kyle's face and two other characters getting bloody noses. Language is surprisingly minor for such a film with just about 4 "s" words and a few others. Overall, it's nice to have a much milder thriller as far as content goes, but it still could have been pruned just a little further.

With all said and done, I did enjoy Flightplan. It's a thrilling and tense mystery despite its minor flaws. While it doesn't carry its pscyhological thriller presentation through to completion, it's still an engaging hour and a half of film.

Sex/Nudity: It's implied that a stewardess and male crew member of the plane fooled around in a compartment (he jokes about wanting to see her crawl through a small space), but we don't see anything.

Alcohol/Drugs: Some people have drinks on the plane. Captain Rich asks Kyle if she's had anything to drink or if she's on any medication and she says she's taken some anxiety pills since her husband's death.

Blood/Gore: We see Kyle's dead husband in his open casket a few times but besides being dead and looking lifeless, it's not gory or bloody in any way; A man has two tiny scratches on the side of his face after Kyle strikes him; A man shoves Kyle over and she strikes her face on the arm rest of an airplane chair. When she comes to, she has a red abrasion on her cheek; Kyle hits a man in the face with a fire extinguisher, knocking him down. We see he has some blood on his ear, nose, and neck from this; Kyle punches a woman in the face, giving her a pretty bloody nose.

Violence: It's revealed that Kyle's husband fell to his death somehow; Kyle is thrown up against the pilot's cabin door by the air marshall when she tries to enter the pilot's quarters; Kyle tries attacking a man; A man punches another when the lights go out on the plane and there is a struggle; Kyle punches another woman; Kyle hits a man in the head with a fire extinguisher; It's revealed some other murders have taken place off of the plane (before the flight); an explosion kills a man, destroying part of the plane Disclaimer: All reviews are based solely on the opinions of the reviewer. Most reviews are rated on how the reviewer enjoyed the film overall, not exclusively on content. However, if the content really affects the reviewer's opinion and experience of the film, it will definitely affect the reviewer's overall rating.