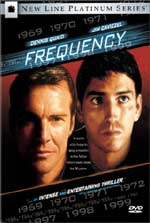 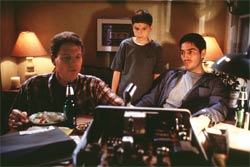 John Sullivan is a cop in 1999 who is down on his luck. One night, after his girlfriend leaves him, he finds an old ham radio and turns it on. Someone contacts him and it turns out to be his Dad, Frank Sullivan from 1969. From then on it's a fast-paced thriller as their contact changes time and they must figure out a way to change it back.

Frequency is a unique film that takes the "what if we changed the past" concept of It's A Wonderful Life, the creativity of The Sixth Sense, the heart of Return to Me, and the intensity of U-571 to form a somewhat schizophrenic mixed genre film with a lot going for it.

A friend and I caught a sneak preview of the movie, which opens April 28th, after seeing the trailer and reading positive reviews for the film. But nothing could prepare us for what we saw. The acting was top-notch and the story was captivating and thrilling, to say the least.

What I liked so much about this film is the fact it's built around a realistic father/son relationship and ordinary characters who are trying to do extraordinary things. The movie has a lot of heart and you really learn to care about the characters and worry what will happen to them. John's struggle with purpose and the loss of his father (even thirty years after the fact) is tough to watch, so it makes it all the more significant when he and his father Frank connect across time through an old ham radio. Their interactions stop Frank from dying thirty years prior, but this only causes more problems as it places Frank in a time and place where he was never originally meant to be. While John is trying to solve a murder case that has resurfaced in his time that had originally began back in Frank's time, the mystery becomes linked in both the present and past, forcing John and Frank (who's merely a firefighter, not a detective like his son) to work together to stop the killer.

The whirlwind plot left plenty of room for intense sequences and some violent content. Not entirely graphic but with, as the MPAA describes it, "disturbing images," we are treated to a few brief moments that would be unsettling to some. While John is studying the murder case, we see the black and white case photos of the murders. Most of them show dead women in different positions with some blood on them. None of these murders are seen, however, one slightly bloody aftermath is brieflt shown where we see blood on her neck and mouth. It's brief and shown in a dark setting, but it wouldn't have been missed if they didn't show it. The other extent of the "blood/gore" lies in where a character loses his hand when it's shot off in the past (shown very quickly), and it decomposes quickly on the character in the future. It reminds me of the special effects-laden mummy being regenerated (or degenerated) in last Summer's The Mummy. It's kind of gross, but again, brief.

The language isn't too bad for a film like this, but there are a couple "s" words, and other forms of profanity. And the sex/nudity is kept to a very small amount-- the one dead body we see gives a brief glimpse of a girl with her shirt open and bra exposed.

In summary, I thought the movie was phenomenal. I was literally on the edge of my seat by the end. It's not at all for everyone due to its intense nature and material. The violent content makes it definitely not a kids movie. Although it stands as one of my favorite films, it could have been improved upon by less language and less violence overall. Great acting by Dennis Quaid and rising star Jim Caviezel, and a great story, Frequency is surely an underrated thriller.

Sex/Nudity: A couple pictures of some of the murders show that the women may have been raped. One in particular show's a woman with her shirt open and her bra exposed (which we later see in person briefly).

Alcohol/Drugs: John drinks some, some guys are seen drinking in a bar.

Blood/Gore: We see some black and white photographs of murders and some blood is seen; Investigators at a crime scene dig up a human skeleton; We briefly see a woman lying on the floor with blood on her neck and mouth; Frank has a scrape above his eye after being beaten up; In 1969, we see a man lunge at another man as a shotgun goes off in front of the man's hand (the hand splattering can kind of briefly be seen), immediately cutting to present day where the assailant's hand decomposes and erodes; We briefly see a man, who's been shot, lying on the ground with some blood.

Violence: An explosion with a fireball; people getting shot, struggles, punches, a person gets zapped with electricity, etc Disclaimer: All reviews are based solely on the opinions of the reviewer. Most reviews are rated on how the reviewer enjoyed the film overall, not exclusively on content. However, if the content really affects the reviewer's opinion and experience of the film, it will definitely affect the reviewer's overall rating.