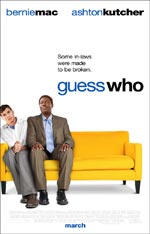 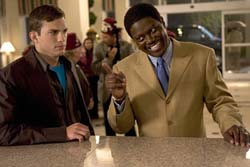 Guess Who, based on the 1967 film Guess Who's Coming To Dinner, stars Bernie Mac as Percy Jones who takes great pride in the knowledge that he is always right. When his daughter Theresa (Zoe Saldana) brings her new boyfriend Simon Green (Ashton Kutcher), home to meet Percy and his wife Marilyn (Judith Scott), he is unaware that Simon has already proposed to Theresa and plans to announce the engagement at Percy and Marilyn's 25th anniversary party. As far as Percy's concerned, no man is good enough for his "baby girl" and when he meets Simon, he's not at all what he envisioned... (from Sony.com/GuessWho)

Although I'm a big fan of old movies, Guess Who's Coming To Dinner sadly has slipped past me. But knowing how different the times were for a premise like that (a white daughter brings a black man home to meet her parents), makes the 2005 version thirty-eight years later seem a little less severe. However, due to the endless struggle to tear down racial barriers and stereotypes, issues like interracial marriages are still relevant in today's society. Guess Who approaches the topic head-on in a way that manages to be fun, sensitive, and serious. 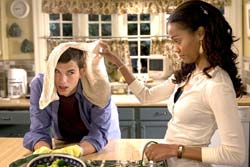 Although I've never been a fan of Ashton Kutcher or have ever really found him to be too great of an actor, he seemed to fair just fine as Theresa's straight-up white guy boyfriend. And I can't imagine a greater choice for a nemesis of sorts than Bernie Mac. Mac and Kutcher played off each other quite well, making their scenes together pretty fun. And with such a sensitive issue as interracial relationships, I thought the filmmakers did a pretty good job presenting the message of the story in a tangible and easy-to-digest fashion. Love ends up being a central theme of the entire film.

And while the Guess Who trailer has played for months in the cinemas, being run nearly to death, I was almost surprised to find plenty of funny moments in the film in addition to that which was spoiled in the trailer. And most of the key moments in the ads that were shown over and over were tweaked slightly for the final product. And Guess Who has plenty of heart which helps carry the film nicely. We're given enough time to get to know the characters and their conflicts are handled rather realistically (and at the same time quite comically). The film's major drawback, however, is its occasional treadings into the unnecessary territory of sexual content. While the film would have passed just fine as a family film, several uses of innuendo and a few near-explicit moments muddle the film's outcome. Specifically, when Theresa discusses with her sister her premarital sex-life with Simon, Theresa mentions the size of his genitals. Some other uses of innuendo are used including a brief masturbation reference (Simon insists to Theresa that he loves her and has never cheated on her "except for that one time with myself and you caught me.")

Guess Who may not be the sharpest script you'll encounter this year for a comedy but is mostly a well-written, well-directed outing. Sadly, the sexual content hinders the film overall and keeps it from earning our recommendation. It's really a shame it couldn't have been cleaned up more to reach a family audience.

Sex/Nudity: Some minor innuendo is made, including (but not limited to)... Percy is convinced Dante is gay (even asking him if his mentioned wedding was with a woman) and his wife insists he's metrosexual; Simon finds a small piece of lingerie in her suitcase and tries it on. Theresa begins chasing her around and tries taking it off him (with him on the bed and her coming up from behind), but her dad walks in and sees this (which looks like something sexual is happening, but there isn't); Theresa's sister Keisha asks her about having sex with a "white guy" and Theresa mentions that his genitals aren't small as rumored and are big and even sing like "big iPods;" Percy shares a bed with Simon to prevent him from sleeping with Theresa (they end up invading each other's space which is played for laughs); Simon calls Theresa to apologize and insists, "I never cheated on you except that one time with myself and you caught me;" Footage from the anniversary party plays in the film and we see Percy and Marilyn sneak off the dance floor. Percy comments that they left to go "shake some sheets" (have sex).

Alcohol/Drugs: Simon and some of Percy's family get alcohol at a resturant; Percy and Simon drink vodka and apparently get tipsy/drunk in the process; Marilyn and her family share drinks with intentions to get drunk (and are rowdy); Some people have drinks at the anniversary party.