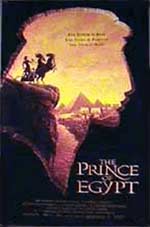 Derived from the book of Exodus from the Bible, this rendition of the story of Moses, begins with Moses' birth when he is placed in a basket and found by the Pharoah's (voice of Patrick Stewart) wife. Moses (Val Kilmer) grows up with his "brother" Ramses(Ralph Fiennes), thinking he is really a Prince of Egypt. However, when his sister, Miriam (Sandra Bullock), confronts Moses to tell him who he really is, he is faced with the reality that all he has known all his life isn't what it really is. God appears to Moses via a burning bush and tells him to lead the Hebrew slaves of Egypt out of Egypt and on to the Promised Land. Moses must then face his former sibling Ramses and convince him to let the people of Israel go.

The Prince of Egypt has to be the most hyped-up film of the season. However, the film successfully meets its hype's demands. The film is very serious, but adds just enough humor to make it enjoyable but not goofy. The animation is the best I think I've ever seen in hand-drawn animation. The end, when the Red Sea is parted, is truly an incredible sight. Sometimes during the course of the film, the "camera" moves around a character as he is in the center of attention as if it weren't animated, but actually filmed in real life. Because of little visual tricks like this, the viewer may find themselves forgetting that they are watching a cartoon. The voice acting is also quite incredible, the animation quality is superb, and the effects are breathtaking.

There's no cursing, no innuendo or sexual encounters, and the violence is subdued, considering the actual Biblical story. However, Prince... isn't for all ages. It's very creepy at times (especially during the plagues), and isn't suitable for all children. On the other hand, the movie is fantastic and should not be missed on the big screen! I suggest that every Christian see this film and support it so more will be made. It has been said that a film like this is being made for the story of Joseph and if Prince of Egypt does well, they will make a movie for Noah and maybe others!

Overall, the movie is incredibly good and has scored a rating of 4 and a half stars out of 5.

Alcohol/Drugs: An unidentified liquid is consumed in goblets-- could be alcoholic.

Blood/Gore: During the 7 plagues brought upon Egypt, the following happens: the sea is turned to blood; people in Egypt have boils on their skin; people smear lamb's blood on the door frames during the Passover.

Violence: Lots. Some of the 7 plagues are rather violent. Moses knocks a man off a platform, killing him; when Moses parts the sea, the water crashes back down after they've crossed and kills the Egyptians. Disclaimer: All reviews are based solely on the opinions of the reviewer. Most reviews are rated on how the reviewer enjoyed the film overall, not exclusively on content. However, if the content really affects the reviewer's opinion and experience of the film, it will definitely affect the reviewer's overall rating.