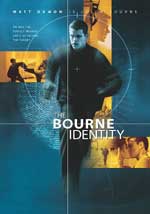 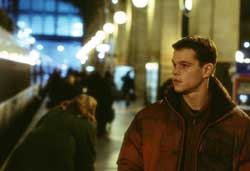 Jason Bourne (Matt Damon) is found unconscious floating in the ocean by a fishing boat. With several bullets in his back and no recollection of who he is or how he got where he is, Bourne sets out to find out his identity. In doing so, he finds he's being followed and hunted down. While trying to find out why, he meets up with an unsuspecting woman named Marie who he pays to take him to Paris. Before long both of them are becoming the targets of their faceless foes as they try to outrun their pursuers and discover Bourne's origin.

OK, well, when you hear the words "action hero," your first thoughts might be Arnold Swartzenegger or Bruce Willis or Sylvester Stallone or the Jamed Bond character. I'm willing to bet one of the last names to come to your mind would be Matt Damon. But could that be what makes this film more unique and, dare I say, believable? Jason Bourne is clearly a spy and who better to pick than the more plain-looking (action hero-wise I'm speaking) than Damon, right?

The Bourne Identity isn't your typical shoot 'em up action film. Bourne isn't James Bond, or Rambo, or the Terminator. He isn't Jackie Chan, or Jet Li. The Bourne Identity is a smartly written spy thriller that cheapens most other films in the genre. It takes itself seriously and it has every right to. Maybe this is due partly because it's based on a famous book, I don't know, but Bourne and Marie are more fleshed out characters then you come to know in films in this genre. Damon fits in suprisingly well for the roll. 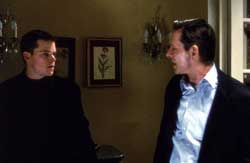 Content-wise, the film has some problems. It pushes the PG-13 envelope when it comes to violence with the sequences of showing Bourne's bullet wounds and the various fights that take place. We see a pretty violent hand-to-hand fight between Bourne and an assassin which includes Jason stabbing his assailant with a pen and we see the man pulling it out of the top of his hand (with some blood). Especially towards the end, several people are shot, with most of them resulting in deaths. Language is the next offender. There's one spoken "f" word, 2 mouthed ones and several other colorful phrases and words. The only sexual content is that its possible Marie and Jason slept together as we see them passionately kiss one night and it cuts away before we see anything else happen. My opinion of it all is it could have done without a lot of the more graphic violence and the unnecessary cussing.

The Bourne Identity was an edge of your seat thriller that was better than I expected. Good characters, good direction, good acting, Bourne Identity is a surprise hit. However, please use discernment when deciding whether or not to see it since some of the content isn't for everyone.

Sex/Nudity: Marie and Jason share a passionate kiss while she stands in her bra after he's cut her hair. He removes his tank top and the scene ends shortly thereafter. It's possible they had sex as we then see the next morning she's lying in bed, but Jason is just sitting on a chair.

Alcohol/Drugs: Marie has a drink after she realizes she's wanted now by whoever wants Bourne

Blood/Gore: When Jason is found in the ocean and brought onto a boat, the ship's doctor cuts away his wetsuit to find two bullet holes in Bourne's back (which aren't oozing blood, but are gross in appearance). The doctor extracts a bullet and we see some blood on it, then he uses a knife to cut something else out from under Bourne's skin and that is also bloody. Later Bourne briefly views his bullet wounds in a mirror and after he removes a patch we see the gross looking wound. A man who fights with Jason has blood on his face and after Bourne grabs a pen to stab the man, we see blood on Jason's hand and again after Jason stabs the man in the hand and leaves it there. The man then pulls the bloody pen from his blood-covered hand. We see a woman sitting on a bench with a bullet hole in her forehead with some blood running from it. There's a tiny bit of blood on a man that's just been shot a couple of times. Bourne strikes another man several times in the face resulting in some bloody cuts. Bourne has some blood on his forehead.

Violence: VERY violent. Several fights result in deaths, lots of gun fights, a man attacks another and the victim stabs the attacker in the hand with a pen, some off screen deaths (we just see the dead body), an explosion, a man falls out of a window and dies, etc. Disclaimer: All reviews are based solely on the opinions of the reviewer. Most reviews are rated on how the reviewer enjoyed the film overall, not exclusively on content. However, if the content really affects the reviewer's opinion and experience of the film, it will definitely affect the reviewer's overall rating.