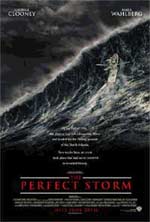 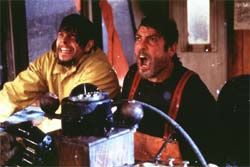 A true story about a group of group of fisherman who were low on money, and went out for another round of catch, determined to make it good in 1991. On their way back, 3 storm fronts collided to create what is known as "the perfect storm." Their ship, the Andrea Gail, was on a collision course for the storm of a lifetime.

The first time I heard about The Perfect Storm, I was stoked to see it. Then, as it got nearer to its release, I heard it wasn't too good from prescreenings. So, by the time it released, I had needed some persuasion to see it. I did (hence this review), and I have mixed feelings about it. So far, it's been about 3 days since I've seen it, and it's stuck with me. The characters were good, the story was good, the acting was good. All that was a plus. However, the language was bad, the sexual references were a damper, and sitting in the second row because we got there late was a drag, too.

Since I've seen it, I want to like this movie. I do. But I'd feel guilty really liking it. See, the problem, besides what I just stated, is the content. You have this "based on a true story" story about fishermen and a really cool storm. You have phenomenal effects, and a gripping climax. But your content's all out-of-whack. Was it really necessary for Clooney to shout the "f" word during an argument to make a point. Um... highly unlikely. It's the only one in the film, and it's so 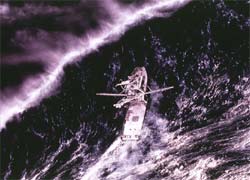 pronounced that it really burns my biscuits. Does the word "omit" mean anything to the editors and director?

With that aside, I was annoyed by the openness of sexual material-- mainly found in the beginning of the film. Comments about a couple going upstairs in a bar and "making the ceiling shake" to actually seeing the lights in the bar shake with the customers cheering. Necessary for a 'great American story.' Heh, no. Also, Mark "Boogie Nights" Wahlberg's character has a girlfriend whom he lives with and sleeps with, but isn't married to. And this is made very apparent, not hinted, in several scenes. And, a character (Bugsy), who you kind of want to like, makes it hard when his main goal while he's in a bar is to find... someone to sleep with.

So some of you are thinking, "Good gosh! Are there ANY redeemable qualities about this movie?!" or something like that... The answer is... um... yeah, if you can "look past" the some scattered debri. There is reference to prayer at the end, as well as a church service. The story is good, effects are good, etc. I'm mainly stressing the bad stuff because it makes me mad they had to include such drivel. The violent content wasn't too bad. However, we do see Mr. Wahlberg's character get a cut on his leg from a shark, and worse yet, we see a fish hook impale [the character] Murphy's hand and pull him off the boat into the water and be dragged by it. Later, we see it in his hand as Clooney's character removes it.

In summary, the movie was good. Like I said, I want to like this movie, but I am really disappointed with some of the content-- the cursing, the sensuality, and the hook scene. It's a 3 star movie, maybe even 3 and a half, but the unnecessary content drops my rating to acquire my 2 and a half out of 5 (I couldn't give it any lower).

Sex/Nudity: In the beginning, references are made to a couple having sex upstairs in a bar and making the lights and ceiling shake, then we see this happen, but not the actual sexual act. Bugsy tries to pick up a woman with the main intent of sleeping with her. Part of Murphy's bare butt is seen when he gets a shot.

Alcohol/Drugs: Lots of smoking, people drinking in a bar.

Blood/Gore: After a shark seizes Bobby's leg, Billy shoots the shark, resulting in a bloody hole in the shark's head. Bobby's leg has a bloody cut on it from the shark. A large fishing hook goes through Murphy's hand and then later see it stuck in his hand, and again as Billy removes it. We see fish being gutted and cut and such several times throughout the movie. A lot of characters have some bloody cuts on their faces and other parts of their bodies from being in the storm.

Violence: Murphy and Sully fight a lot, punching, people drowning, people being tossed around in a storm. A helicopter crashes, a boat sinks Disclaimer: All reviews are based solely on the opinions of the reviewer. Most reviews are rated on how the reviewer enjoyed the film overall, not exclusively on content. However, if the content really affects the reviewer's opinion and experience of the film, it will definitely affect the reviewer's overall rating.