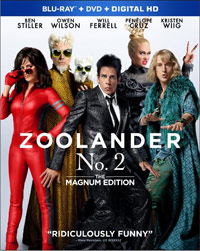 Derek and Hansel are lured into modeling again, in Rome, where they find themselves the target of a sinister conspiracy. (from IMDB) 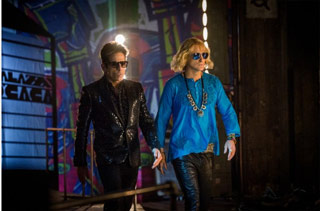 Comedies are interesting phenomena. Sometimes they release to little fanfare but find a life after it leaves the theaters. Others do well at the box office and also afterwards, and ultimately become cult classics. Still others might do well at the box office but decrease in popularity over time. In the case of Ben Stiller's 2001 film, Zoolander, it released to poor reception and ended up becoming a favorite of many over the years that followed. This spawned talk of a sequel, but it didn't come to fruition until 15 years later. And much like Dumb and Dumber To or Anchorman 2, the end result is a mixed bag that rides heavily the wave of nostalgia off the first film, but ends up more of a hot mess than recapturing what made the first entry so enjoyable.

Zoolander released just weeks after the 9/11 attacks in New York in 2001. They even digitally removed the Twin Towers from the background of a scene to try to be sensitive, but it just caused more controversy. It tanked at the box office-- I do remember seeing it and not liking it due to some of the really off the wall sexual jokes -- but it found its fans over the years that followed. (I rewatched it edited via CleanFilms a few years later and liked it a lot more). Sadly, by the time it finally found its sequel, it may have been too long since its initial release... And the the Zoolander sequel, like its predecessor, failed to make an impact at the box office.

Zoolander No. 2 takes place about 15 years later. Shortly after the events of the first film, Derek had "The Derek Zoolander Center For Kids Who Can't Read Good And Wanna Learn To Do Other Stuff Good Too" built, but it collapsed and killed his wife, Matilda. And after he proved to be a terrible single parent, child services took his son Derek, Jr away and the former male model went into hiding. But with a special visit from Billy Zane, Derek was inspired to try to get his son back by becoming a successful model once again. The plot is as silly as the film, but Stiller knows this and doesn't back down from making the entire film as outrageous as possible. These kinds of films are a bit old school if not really dated -- like the largely unfunny recent Dumb and Dumber sequel -- but like anything that once was popular but isn't anymore, it's an acquired taste. Zoolander 2 actually still has some funny moments, even if the rest of the time you'll just want to shake your head or cringe at how bad a gag is. The finale, for example, makes the same mistake most sequels make and tries to top the previous movie in size and scope. It's got its moments for sure, but in the end, you have to question the choices made by the filmmakers that end up cheapening the original film a bit. While the epic news team battle at the end of Anchorman 2 is entertaining and fun, it's lazy storytelling and piggybacks off of one of the best jokes from the first movie too much. Zoolander 2 sadly makes some of the same mistakes. 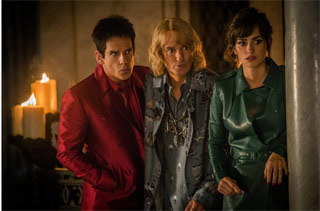 
Zoolander No. 2 arrives on Blu-Ray in a 2-disc Blu-Ray/DVD combo pack with a digital copy. It also appears to be "UNRATED" on the Blu-Ray and digital copy, but the content of the film seemed on-par with PG-13. I'm not sure what was different between the theatrical and the Blu-Ray (we didn't see it in the theaters), so I can't really say what was changed, but I imagine a few crude lines were added and probably Bieber's death is more violent. 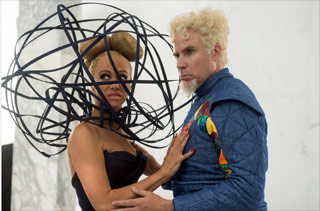 The Zoolander Legacy (9:02) - Here, Ben Stiller and the filmmakers talk about how the original movie performed (and was ill-fated by its release right after 9/11). Celebrities - including those who play a part or do cameos in the sequel - talk about how much they loved the original and how classic it is. Benedict Cumberbatch even admits to loving the original so much that he was absolutely desperate to be a part of this movie! (1 "a" word in this featurette)

Go Big or Go Rome (7:38) - Stiller admitted to really wanting to shoot a movie in Italy. We see footage of him scouting in Rome and they talk about how they felt it was appropriate to move the story from NYC to Italy for the sequel. They talk about working at historic sites, as well as having worked on location in Rome for 6 months! (1 bleeped "F" word from Justin Theroux)

Drake Sather: The Man Who Created Zoolander (8:26) is all about a comedian who had written the Zoolander character for a short sketch, and asked Ben Stiller to play it. Slather also co-wrote the original 2001 film. Sadly, the comedian who died of apparent suicide in 2004 (something they don't address specifically here). This featurette serves as homage to Ben's friend and his legacy. It's a nice touch for them to spotlight him here. (There are a couple of clips of Drake telling some crude jokes, and there are 2 uses of "h*ll")

Youth Milk (1:30) - Kristen Wiig stars as her botox-abusing character Alexanya here for a fake commercial for "youth milk," her product to make you look young again.

Sex/Nudity: Billy Zane delivers Netflix movies to Zoolander who excitedly says "Jack Ryan and Jack Reacher?! Tonight's going to be a complete Jack-off!"; Hansel enters a room in a hut filled with men and women. He talks about how it was the best orgy of his life, and they all hold up pregnancy tests to reveal they are all pregnant - including Kiefer Sutherland; We see girls wearing skimpy outfits at a fashion show. A couple of them have most of their bare butts showing in thong-like bottoms; A character named "All" is a transgender and a joke is made about them marrying themselves. Hansel asks if he has a hot dog or a bun, then a Weiner or a "veiner"; Later, All whips them on the catwalk and Hansel shouts "It's a hot dog! Definitely a hot dog!"; We see an old commercial of Derek's where he's a half-man, half-cow. We then see a woman milking his udders and his pleasured reaction. She then has milk all over her face. It's all meant to be suggestive in a humorous way; Hansel is in a steam room in just a towel around his waist when a group of men and women approach him. They tempt him into an orgy and we see them kissing and it getting sensual before they're interrupted by his original orgy group - who are really hurt and offended (no nudity or explicit sexual content shown); Interpol talks about the real Fountain of Youth and Derek comments about having worked there and they didn't have "happy endings." A comment is then made about it being the real Fountain of Youth, "not a hand job house;" Hansel asks Sting if he really has sex for 10 hours straight. He first says "no comment," then whispers "15;" Valentina talks about how her boobs were holding her back as a model because they were too big to fit in a "sample size." She opens her coat to reveal her cleavage; Alexanya and Mugatu make out awkwardly, and smack tongues together; Mugatu and Todd make flirtatious faces at each other until it weirds out Mugatu; Mugatu tells a kid to eat "whore pasta" that's "made by a whore;" Valentina takes off her coat to reveal a corset and a lot of cleavage. She then tells Derek to hold on to her breasts from behind as she swims. She then pulls his hands to cup her cleavage. We later see them slide through the mud onto the shore with him still holding her chest; Hansel inappropriately talks about sexual acts he and Derek had with Matilda, saying she had a mouth like Chinese finger cuffs, and how it tightened the more you pulled; Derek says his son may have been a mistake, and that he wasn't sure because of all of the sex he was having at the time; Alexanya punches Valentina and they fight. She rips her face off and it's actually Katinka. They fight and rub their hands on each other. Mugatu exclaims "They're sexy fighting!" Tommy Hilfiger comments "Tommy likee" and Derek Jr also appears to like it. Todd, who is clearly gay, acts repulsed by it.

Alcohol/Drugs: We see people drinking at a party.

Blood/Gore: A man being pursued is then cornered and a motorcycle driver pulls out a machine gun pistol and unloads hundreds of bullets into who turns out to be Justin Bieber. We see him riddled with bullets and really bloody. He then falls over with blood all over his clothes as he takes a selfie before dying; We see a flashback of Zoolander with blood all over his face after a building collapsed; We see a flashback/dramatization of an ancestor of Derek being sacrificed. We see Mugatu stabbing him off screen with blood squirting up at him. He then raises a human heart up in his hand; A knife sticks into Derek's cheek and we see blood around it. He soon pulls it out and we see blood on his face there.

Violence: Motorcycles chase and shoot at a hooded person. The person being pursued jumps over one of them and snaps a neck of one of the helmeted drivers in slow motion (not graphic). He's then cornered and a driver pulls out a machine gun pistol and unloads hundreds of bullets into who turns out to be Justin Bieber. We see him riddled with bullets and really bloody. He then falls over with blood all over his clothes as he takes a selfie before dying; We see footage of a building crumbling and falling into surrounding water and hear about some who died during this; Derek angrily slaps a box across his room; To see if Zoolander can stop objects with his Magnum face, Hansel throws things like bottles and a TV remote at his face, but they all hit him; "All" whips Hansel and Zoolander while they're on the catwalk; Derek takes a selfie while driving and ends up crashing the car with it flipping multiple times before stopping; We see a flashback/dramatization of an ancestor of Derek being sacrificed. We see Mugatu stabbing him off screen with blood squirting up at him. He then raises a human heart up in his hand; Derek angrily tears up a wig; Mugatu bites Derek's hand and wraps him in chains; Mugatu rips off his fake skin of muscles to reveal his normal self underneath; Mugatu throws hot coffee in Todd's face; Mugatu breaks the hipster's neck with his feet; Derek kicks Mugatu; A knife sticks into Derek's face and we see blood around it. He soon pulls it out and we see blood on his face; Derek tries to throw a knife to Hansel and it sticks into his leg (and we see it sticking out); Alexanya and Valentina punch and claw at each other. The skin is pulled off of Alexanya to reveal Katinka in disguise; a bomb pins a man to the ceiling and he and it explode into confetti. Disclaimer: All reviews are based solely on the opinions of the reviewer. Most reviews are rated on how the reviewer enjoyed the film overall, not exclusively on content. However, if the content really affects the reviewer's opinion and experience of the film, it will definitely affect the reviewer's overall rating.