DA' T.R.U.T.H. AND J.R. TO APPEAR ON "CHRISTMAS AT THE CATHEDRAL"
Cross Movement Records Artists to Share Stage with Today's Hottest Gospel Acts on Dec. 4th

Stellar Award winner and 2008 Holy Hip-Hop Award honoree Da' T.R.U.T.H. is currently leading the hip-hop category for the Gospel Music Channel Video Awards (GMCVAs). The video, "Who Am I (featuring Tye Tribbett)," from Da' T.R.U.T.H.'s Open Book album, is nominated and currently ahead of artists such as tobyMac, Soul P. and Tonex. Voting for the GMCVAs ends December 6, 2007.

Da T.R.U.T.H.'s Open Book project, which released this summer on Cross Movement Records, set a new record by securing the highest Soundscan/Billboard Chart debut for a gospel hip-hop artist when Open Book captured the #2 position on the Billboard Top Gospel Chart. The album also debuted at #1 on Soundscan's Christian R&B/Hip-Hop Chart and at #3 on the iTunes Christian & Gospel Chart. Open Book has delighted fans across a variety of genres according to Billboard's charts, debuting at #5 on the Contemporary Christian Chart, #6 on the Top Christian/Gospel Chart and #18 on the Rap Chart. The album's single, "Who Am I?" featuring Tye Tribbett, debuted at #9 on HipHopRnBSoul.com's Top 10 Hip-Hop Songs as the only gospel song on the chart, sandwiched between Kanye West's "Can't Tell Me Nothin'" and 50 Cent's "Amusement Park." Da' T.R.U.T.H. was also named one of the top "Movers and Shakers Under 40" this summer by Trumpet Magazine alongside Detroit Mayor Kwame Kilpatrick.

J.R. is gearing up for the December 26, 2007 release of his sophomore project, Life By Stereo. The familiar voice behind numerous memorable hooks on Stellar Award-winning, GRAMMY-nominated and Dove-nominated Cross Movement Records projects, J.R. is the first R&B artist signed to that label. He is a versatile crooner and multi-talented producer with his own unique style and is the point man behind So Hot Productions. His list of collaborations includes "Cry No More" (Holy Culture, The Cross Movement), "N.F.L. (New Found Love)" (Moment of Truth, Da' T.R.U.T.H.) and "My Clothes, My Hair" (The Thesis, The Ambassador), to name a few.

Da' T.R.U.T.H.'s Open Book is available on Cross Movement Records and distributed in the CBA market by Provident-Integrity Distribution and by Sony RED in the general market. For more information on Da' T.R.U.T.H. and his new album Open Book, visit www.datruth.net, myspace.com/truthonduty or www.crossmovementrecords.com.

J.R.'s Life By Stereo will be available on Cross Movement Records and distributed by Provident-Integrity Distribution in the CBA market and by Sony BMG in the general market. For more information on J.R. and his new album Life By Stereo, visit www.crossmovementrecords.com. 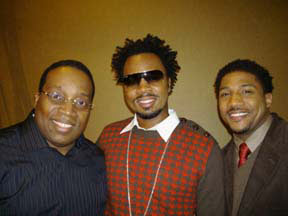