*TobyMac recently wrapped up his very successful Portable Sounds Tour, including sell out shows in Columbus, St.Louis, Kansas City, Oklahoma City, Tulsa and more when he helped KSBJ radio garner their biggest concert ever, playing to over 10,800 ticketed fans at the BERRY CENTER.

"I was getting calls from promoters to add a second show or move to a larger venue, commented True Artist Managements Laurie Anderson.  Given the current touring climate, that is a great problem to have. We are very thankful for a great touring season last spring and this fall."

*Filmed for a LIVE DVD scheduled to be released April 1, 2008, the show was the first of two due to the sellout, with the second show experiencing a capacity crowd:

"As a promoter in Houston, I don't often have a show perceptive from the middle of the mosh pit, BUT when one of music's most creative geniuses accepts your offer, sells out in less than one week, adds a second show, and brings a "King"-sized party to townI had no other choice but to join the thousands of Jesus Freaks erupting in the stands," recalls Tammy Johnson, KSBJ Special Events Director, "TobyMac and Diverse City turned on the ignition and took over 10,000 KSBJ concert fanatics from 0 to 100 in seconds... his LIVE show is an electrifying experience for the whole family. I seriously can't wait for the DVD!"

*TobyMac is currently gearing up for his annual WinterWonderSlam tour, now a must-see show each December, which is also experiencing sell outs, before it even begins.

*In addition, Forefront recently released the Portable Sounds Deluxe Edition, featuring an exclusive bonus DVD on-packed to the Portable Sounds CD, and will featuring all five Tobymac music videos ("Boomin'", "Gone", "Irene", "Get This Party Started", and "Extreme Days"), bonus behind the scenes footage from the making of "Boomin'", band interviews, touring, etc.

"Portable Sounds" was TobyMac's highest solo debut ever on the Billboard Top 200 chart (No. 10), and after hitting No. 1 on SoundScan Contemporary Christian Overall chart in its first week as well, the project has already scanned over 300,000 units and is still solidly in the top 20 after 40 weeks of release. Along with this sales success, over 100 Christian radio stations played his smash hit singles "I'm For You" and "Made to Love", and after 18 weeks on the charts, "I'm For You."

TobyMac released his solo debut ("Momentum" 2001) followed by the critically acclaimed "Welcome to Diverse City" (2004), both of which received GRAMMY nominations, and most recently were awarded RIAA Gold Certification. As a solo artist, in addition to rave reviews and always ending up a favorite in magazine and internet Reader's Choice polls each year, TobyMac has also won seven Dove Awards, received nine GMA Music/Dove Award nominations, and was recently nominated for an American Music Award as Favorite Inspirational Artist. 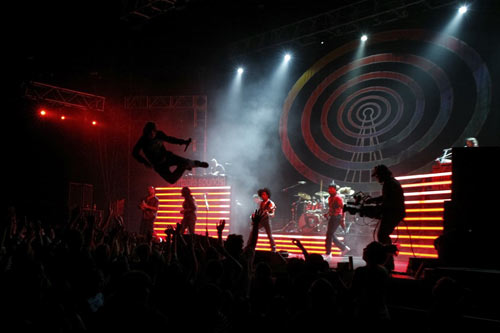