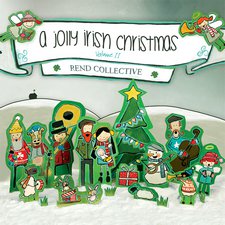 
Rend Collective, Ireland's hardest-working worship band, is back for their fourth album in two calendar years. I must say, I've been pleasantly surprised with Rend's latest efforts. They've shown a subtle maturity, all the while brimming with their trademark joy. Their second full-length Christmas album (a rare feat), titled A Jolly Irish Christmas Vol. 2 follows suit, and isn't all that hard to sum up. It's a mashup of classic and original Christmas tunes done in the bands signature Irish-worship style. By now, we know what to expect from Rend, and for me, that down-to-earthness is their charm.

A word about the mashups mentioned above; many advent classics are here joined to a fresh chorus, delivering lyrical relevance and audial dynamics - a la Chris Tomlin's "Amazing Grace (My Chains Are Gone)." Though by the end of the record this formula gets predictable, it's near impossible to disagree with this direction as it allows the band to revel in their exuberant Irish-ness, while keeping the purists from raising a stink. No song exemplifies this more than "We Three Kings (We're Not Lost)," which begins quite traditionally before bursting into a full-on Irish-worship jig, applying the story of the magi to our day, "In the dark/we're not lost/when it's hard/don't lose heart/we're never truly lost."

Without question, the two all-original offerings are the highlights. "Today Is The Savior's Day" won me over with its rowdy tavern feel, reminiscent of Billy Joel's "Piano Man," and a message that calls for family peace around the holidays, letting "the bygones be bygones and healing begin, today is the Savior's day." While the low-key "Emmanuel You're One Of Us" hits home, obviously referencing the trial of the current calendar year in which we find ourselves, Rend states "It's so hard to forget about all that went on/some friends lost their jobs and some family too/some people said it was all down to You." Seldom covered songs "Christmas In Killarney" and "Christmas Is All Around" are tailor-made for the Collective to tackle, and even if they're done in a somewhat predictable way, the unabashed Christmas spirit is simply infectious.

For musicians, Christmas music offers a unique challenge. As history's clear frontrunner for 'musical holiday,' where do you draw the line between traditional and modern, and how much tweaking is too much? With Jolly..., Rend Collective has managed to walk softly between their Irish heritage, joy fueled worship, and traditional holiday hymns. If you're looking for a meat-and-potatoes Christmas album with an Irish flair and some new twists on yuletide favorites, snag this one.