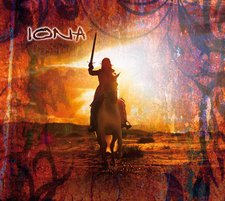 Besides introducing the world to artists such as DC Talk, Audio Adrenaline and Rebecca St. James, one of the greatest gifts that Forefront records gave to its American audiences in the 90's was the introduction of the Irish band Iona. This band, named after a small rocky island off the coast of Scotland that was the center of Christian missionary efforts in the British Isles in the Middle Ages, has been quietly releasing epic, ethereal Irish folk rock albums for over twenty years. And the band's latest release, Another Realm, is no exception.

A loosely based concept album about the Kingdom of God (the one that Jesus talked about that was both now and not yet), the subject is weighty and dense. Yet, the band's grand sound (swirling uilleann bagpipes, Irish whistles and guitars, driving angular rhythms and vocalist Joanne Hogg's captivating, otherworldly voice) brings what could have been a dry theology lesson to vivid life. It's sort of like Charles Ryrie's classic textbook Basic Theology crossed with The Lord Of The Rings movies.

Book ended by opening song "As It Was" and closing number "As It Shall Be," Another Realm opens with the words "Iona of my heart" which uses the tiny windswept island as a metaphor for how Heaven can invade earth by way of the human heart pouring out God's love to the world. Where this love comes from is explained in the next song, "Ancient Wells." The track opens with a mournful set of bagpipes that conjure up an image from the movie Braveheart, then explodes with pounding drums as the "thesis statement" of the album implores the listener to pray that "the ancient wells will be opened again, that the river will flow and this land will be cleansed, that your kingdom will come," and that "revival will fall."

This theme of another "power source" is spurred on in the following title track where Hogg's vocals proclaims that there is a place where "Heaven's portals are opened to the sun, and Heaven's light is pouring to the ground" and "it is for us if we dare." This last phrase is repeated as a driving refrain that ends the song as the instruments reach a frenzy pitch. All of this can seem like a lot of New Age hokum upon first listen, especially if you are not familiar with this band's strong connection with the church in the British Isles, but the source of these songs is revealed in "Let Your Glory Fall" where the lyricist repeatedly asks "Holy Spirit, please won't you come in" and "let your glory fall."

The album concludes with the twelve minute "White Horse," a description of the second coming before repeating the coda of the album with the closing "And It Shall Be." These sweeping and powerful songs are balanced by the quieter middle moments of the double album's ninety minute running time. In "Speak To Me," the main character sits for a quiet moment and seeks wisdom in his life, and in "Foreign Soil," the narrator admits that "history has scattered far the hearts that seek their home," they are "drawn towards your perfect love to melt into your son," but for now "here on foreign soil I stand."

With songs averaging more than seven minutes each, Another Realm is a dense concept album that will take a few listens (and perhaps a pen and notebook) to unpack, but it possesses enough rocking stand alone songs to keep the listener engaged. Comparable in scope and artistic quality to rock operas like Pink Floyd's The Wall and The Who's Tommy, Iona's Another Realm is a masterful album, with a compelling theme and storyline, and epic, moving music that easily could translate into a movie or onto the Broadway stage.