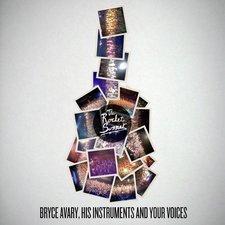 The Rocket Summer
Bryce Avary, His Instruments and Your Voices

Bryce Avary, His Instruments and Your Voices is a 17-track live album from the one-man-band Bryce Avary, known as The Rocket Summer. This album is available as a free download from NoiseTrade and features tracks from all four TRS albums, as well as a bonus track from his upcoming album. I had never heard of The Rocket Summer until I saw him open for Switchfoot on their 2012 tour, and now I kick myself for it. I quickly became familiar with this young artist.

Bryce Avary is a witty songwriter, talented musician, and charismatic performer. Something should be said about the live aspect of this album, though. Live albums are not everyone's cup of tea, but this album is really an experience of Avary's music. At many times, the crowd drowns out his voice, and while this may not satisfy the listener trying to become familiar with TRS, it will satisfy the long-time fan, and anyone who wants an album to really sing along to.

The album features one song from Avary's debut album Calendar Days (2004), three songs from Hello, Good Friend (2005), five songs from Do You Feel (2007), four songs from Of Men and Angels (2010), and the bonus track from Life Will Write the Words (2012). The remaining three tracks include messages from Avary and a fun instrumental track. Some of my favorite TRS tracks did not make the cut, but the selection does feature most of his career's defining moments. The songs also flow fairly well for being a live sampler. It starts out with upbeat, singable songs, and slows down only a few times.

This album does have flaws, however. It doesn't really do much to showcase Avary's vocal or instrumental skills, most of the time featuring only an acoustic guitar and the voices of Avary and the crowd. I don't normally pick up live albums, especially when they are compilations, however, this is a great free album to pick up, and one that I will be blasting and singing along to for a while.