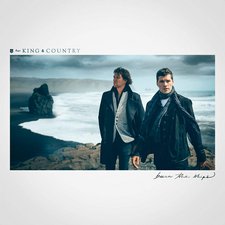 for KING & COUNTRY
Burn the Ships


for KING & COUNTRY made waves in the CCM scene when they first released "Busted Heart" off of their debut album, Crave. It was an unexpected and immediate success for the brothers. Perhaps people just latched onto to their sincerity; perhaps their sister, Rebecca St. James, gained them some early favor. No matter what it was, fK&C quickly stole our hearts with their music and began to amaze with their live performances. After a really solid follow-up in Run Wild. Live Free. Love Strong., expectation are higher than ever for the Smallbones' third album, Burn the Ships.

"Introit" (a psalm sung or said while the priest approaches the altar for the Eucharist) needlessly opens the album. Intro tracks are often really good and meaningful, but unfortunately "Introit" doesn't really lead into the first song and there is no real connection to make it memorable. "joy.," the album's lead single, starts the album off in a fashion that you'd expect from fK&C. The track has big sound and production with the pounding drums sound the guys are known for having in their music. The song even features a refrain from the classic song, "Joy in My Heart" -- sung at many Sunday school classes and VBS events over the years. "God Only Knows," a song about depression and suicide, follows next. The Smallbones, especially in the video, show the struggles, but offer hope in God's love. It's nice to see a Christian band tackle such a serious issue in this manner -- everything isn't always sunshine and rainbows in the world and in our lives. "Amen" changes things up quite a bit and the boys bring a Latin flair and energy into the mix. The title track is a reference to Cortés in 1519 as he began his conquest of Veracruz. When they arrived, Cortés ordered his men to burn the ships; it was a sign that they would complete their conquest and not look back or retreat. Luke and Joel use this same idea to describe our lives as Christians: Once we accept Christ, we shouldn't be looking back to the past or retreating. While it's not really the most interesting song musically, the concept and lyrics of the song are fantastic. "Fight On, Fighter" continues an impressive streak that is slower and calm in the verses, but builds into a much bigger song in the chorus.

As impressive as the first half of the album is, the second half feels a little more disjointed and not as cohesive. "Need You More" just sort of meanders along in a very minimalistic manner. It's not necessarily a bad song, but it's certainly the least interesting on the album. "Control" follows and suffers from some of the same issues on the musical side. "Never Give Up" is a fun listen musically and the guys regain a little of the spark, but this one suffers lyrically. The songs falls into a common pop music trend with just three words repeated for the entire chorus -- every time. It seems that a different approach could've made a more impactful song, but as it is, many will likely love the singability. "Hold Her" winds the album down with a romantic song about missing your loved one. The song is a prayer for God to look over his wife while he's away and is something that many people can relate to in their own lives. "Pioneers" closes the album out by adding boys' wives (Moriah and Courtney) in another romantic love song. While the ladies add a really nice touch vocally, the song itself falls a bit flat -- much like "Need You More" and "Control" earlier.

At the onset, it seemed that Burn the Ships could have been for King & Country's best album to date. The entire first half of the album, outside of "Introit," is really good and enjoyable. However, the album breaks down a little in the back half. While no song present it outright bad, the Smallbones have set a very high standard for themselves over the past couple of albums. A very enterprising and compelling first two albums lead to extremely high expectations when it comes to album number three. Burn the Ships isn't necessarily "safe," but it isn't as aspiring as their earlier work. However, the album has some very bright moments and some more poignant ones as well. I'd definitely recommend giving it a listen, but I'd also encourage you to quell your expectations just a touch. Regardless on my thoughts on Burn the Ships, I'll still be standing by and waiting excitedly when album four drops.

The GRAMMY nominated brother pop/rock duo, for KING & COUNTRY, hailing from Australia returns again with their third release, Burn The Ships. After bringing us previous hits, like "It's Not Over Yet" and "Fix My Eyes," the band has increased their fan base worldwide. A lot of that is due to their highly enthusiastic and theatrical concerts that are hard to resist for even an individual with no knowledge of the band.

The album starts off with a very soft but brief musical track leading into the highly popular single, "joy." It's easy to see why they picked this song as the opener, as it has a very energetic rhythm that is very entertaining. It even gives a nod towards the "Joy in My Heart," originally written by George William Cook in 1925. "God Only Knows," while simplistic lyrically, works effectively as a memorable ballad like their song "People Change," from their debut album, Crave. Likewise, "Amen" should quickly become a favorite among for KING & COUNTRY fans. The pulsating drums and choir in the background is reminiscent of the 80's classic, "Rock Me Amadeus" by Falco.

The album takes on a more serious tone with the title track. It evokes a sound similar to the fan favorite "Light It Up," and it encompasses the challenges of saying goodbye to times of depression and pain by welcoming a new life. "Fight On, Fighter" provides words of inspiration to people that feel like giving up, by telling them to keep pressing on even when others try to discourage them. "Never Give Up" is probably one of the tracks that could be omitted since some listeners may find it bothersome as the title is repeated a bit too much. "Hold Her" is perhaps the standout track on the album as it conveys much sentiment and could be the next timeless fan favorite for KING & COUNTRY tune with very sympathetic lyrics that plead for God to look out for those who need comfort when we're not present with them. The album closes with "Pioneers, which is a stirring tune, having Joel and Luke's wives join who are equally as talented; Moriah Peters, who is already a recognized artist with the remarkable release of Brave, and Courtney, who had been featured previously on the duet song, "Without You" (on Run Wild. Live Free. Love Strong). Their contributions make this a memorable bookend to the album that links with the opening "Introit".

They have toned things down a bit on this release, which leads to a new chapter in this band's life. Overall, Burn the Ships is a must-have for any of the for KING & COUNTRY fan and perhaps those who favor the lighter side of pop and rock music. - Review date: 10/5/18, Wayne Myatt of Jesusfreakhideout.com

for KING & COUNTRY's Burn The Ships is really the tale of two albums. Tracks one through six are creative, energetic and compelling (basically the band's hallmark thus far). First single "joy.", the heartfelt "God Only Knows" and the epic "Amen" are among the band's best works. But the album falls into a mid-tempo rut during the back half, and the dull "Need You More" and the cloying "Never Give Up" (which includes those title words as the sole, repeated lyrics of the chorus) are b-sides that shouldn't have made the record. The album is neatly divided into essential songs and filler, and as such, this project would have made a great EP and a fine collection of b-side tracks on a compilation album down the road. - 10/3/18 Alex Caldwell

The Australian duo and CCM powerhouse for KING & COUNTRY have crafted their most cohesive album yet with their third project, Burn The Ships. With fantastic lead singles, and a good mix of fun and personal tunes, this album is a highlight pop release of 2018. - 10/4/18 Christopher Smith