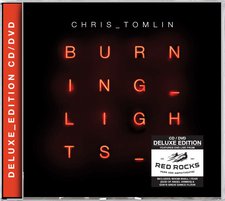 Colorado's Red Rocks Amphitheatre is certainly an epic place to film a concert. From classic moments in the 80's with U2's Bono marching around with a white flag in the dense fog, to more recent times when Mumford & Sons brought their grand, old-timey sound to the cliffside location, the red rocks framing the stage have seen many musical acts try to match the stunning space with music as beautiful and grand as the scenery.

Given his stature in the Christian music industry, Chris Tomlin is certainly a good candidate for such a showdown. He writes and performs songs that aim to be as big as the mountains, and in the concert film included with the deluxe edition re-release of his most recent album Burning Lights (see here for the original review for the Burning Lights portion of this project), Tomlin and his longtime band mostly succeed in matching soaring tunes with the red cliffs and iconic vistas of the amphitheatre.

When someone reaches the level of popularity of Chris Tomlin (and his songs, one of which you probably sang in Church this past Sunday morning), it's inevitable that there will be some critical blowback when it comes to new material and performances. But if you are honest, and not trying too hard, when "How Great Is Our God" is sung in a crowd, it's tough not to get swept up in that fantastic and simple melody. Hearing this tune, and others like it, in a place like Red Rocks feels like a pretty good match overall.

Starting with the bouncy "God's Great Dance Floor," Tomlin and company have the crowd in their hands from moment one. Even the clichéd joke about white people dancing is handled pretty well in this setting. (Tomlin is truly an awful dancer, as evidenced many times in this film.) Following track, "Awake My Soul," is the song that best matches the atmosphere of the setting, and even the video cameo of Lecrae rapping his part of the song is smartly handled, giving the song a needed grounding (and just a dab of street credibility along the way). "White Flag," "Whom Shall I Fear (God Of Angel Armies)" and "Sovereign"--all new songs--are wisely added to the mix of Tomlin's other, well-known songs ("Our God," "Indescribable," "Amazing Grace (My Chains Are Gone)"), and each mix well with the moment. Tomlin's good friend, and fellow Passion Conference founding father, Louis Giglio adds a deft touch to the evening with a brief sermonet based around the song "God's Great Dance Floor," and the story of the prodigal son returning home to a celebration with the father "dancing in joy" at his son's return.

Ending with the inevitable, but still moving, "How Great Is Our God," Tomlin shows that he has the musical muscle and catalog to match the surroundings and engage the heart, soul and mind in worship.

As with so much of today's worship music, the main critique is not as much the music or film production here (both are pretty good), but in the packaging and marketing of the product. Attaching this fine concert film (which alone would have made a pretty good release, like the recent Mumford & Sons concert film which included an audio album of the show along with the concert film) to an album that many fans most likely already have, smacks of gouging the audience and squeezing every penny out of Tomlin's wide fan base.

For the actual film and performance, Tomlin and his band earn four out of five stars. For the way the record company handled the release of the film, I give two stars, leading to an averaged score of three stars for Burning Lights: Deluxe Edition CD/DVD.