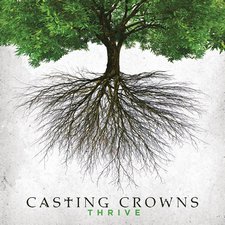 Without a doubt, after over 8 million record sales, Casting Crowns is the most successful act under the umbrella of the Christian music industry in the past decade, with their music and their ministry touching the lives of millions. In spite of their success, the critical attitudes towards CC and their music includes both that their music is among the most compelling and moving in the industry, as well as among the most bland and clichéd. Both have their cases, and I personally have swung from both extremes, having previously both adored and abhorred their music at different times in my life. In any event, however, I cannot help but get the feeling that CC stepped up their game on Come To The Well, which is without a doubt (in my mind) their most respectable and well-rounded project yet, and following up that project with an acoustic album showed a further willingness to step out into realms less-often explored by seasoned AC-veterans like what CC has become. Can Thrive continue this positive trend and deliver a surprise for all naysayers?

Opening the album with the title track, the group offers their take on folk-pop; complete with banjos, gang vocals, and desert oasis imagery, Casting Crowns gets off to an altogether solid start. Folkish tendencies continue to permeate the album at various points, but regrettably this new(-ish) direction is relegated to the background in the grand scope of classic Casting Crowns contemporary. Other highlights include the tender piano ballad "Broken Together," Megan Garret's folk-tinged ballad "Follow Me" (so unique-sounding amongst the band's catalogue that most wouldn't guess it was CC) and the foreboding, "prowling-lion" themed closer, "Waiting on the Night to Fall." "Broken Together" in particular ranks among the best (if not the best), most poignant and most personal of Casting Crowns' songs, offering a mature glimpse into Hall's marriage of 21 years ("Maybe you and I were never meant to be complete / Could we just be broken together? / If you can bring your shattered dreams and I'll bring mine / Can healing still be spoken and save us?").

Too often, however, the album lags and the band is caught in the same ruts of melody and songwriting that have dominated their previous releases. The first radio single in "All You've Ever Wanted" displays all the familiar caveats of the band's AC sound (though longtime fans may be amused to find references to past songs in the lyrics), and "Just Be Held" and "You Are The Only One" follow similar patterns (the latter with a more vertical worship bend reminiscent of turn-of-the-century Hillsong). "Love You With The Truth," mostly falls flat as an orchestral rocker, and "House of Their Dreams" thematically seems to me very much like a mellower version of the group's well-known "American Dream."

The lowest point of the album is the attempt of retelling and relating to Biblical stories in "Dream For You." In short, the intended message is for God to "dream our dreams for us" and follow His vision for our lives, using the lives of Mary and David for support, but it comes across more as a call to look for signs from God for all major life decisions (a position with significant theological, not to mention practical, problems). In addition, in an attempt to make the stories more relatable to modern audiences, they took what this reviewer feels were significant Biblical and historical liberties. For instance, David traveled to the Israelite camp because he was bringing food to his brothers, not because he was told by God to fight Goliath as the song indicates, and Mary, as a 1st century Jewish woman, would not have planned for her wedding (or, at least, not in the modern sense of planning as the song seems to indicate).

Both Come To The Well and Acoustic Sessions showed encouraging signs of growth for the band, but Thrive does not build on that growth as much as I feel it should, and although it definitely presents a step or two forward in some respects, it mostly presents stagnation or regression. Casting Crowns remains in the mystery realm between lyrically compelling ("Broken Together," "Waiting On The Night To Fall") and mediocre to a fault ("Dream For You"), and I can't quite figure out which end they lean towards more. And their trademark sound, unmistakable through fact that it has essentially become an industry standard, still leaves many listeners with much to be desired. As is, apologists and naysayers alike can definitely both safely sink their teeth into this one and be assured their opinion of the band will be safely supported with Thrive.