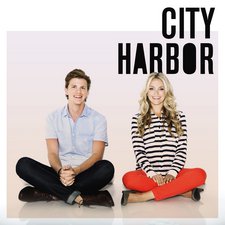 Amongst 2013's emerging artists, one of the ones that slipped in more quietly is the worship pop duo City Harbor. City Harbor is rooted in Nashville and has been making waves since they started writing and performing together in 2011. Now signed to Sparrow Records (and after a male vocalist swap from Josh Varnadore to current member Robby Earle), the Nashville natives have since released an EP back in the fall of 2013, and are now poised to release their eponymous first full-length with Sparrow.

Comprised of Molly Reed and Robby Earle, the singer/songwriters focus on uplifting and honest lyrics while presenting their songs in a tightly wrapped alternative pop/indie sound. Their lyrics span anywhere from singing about letting go of their troubles and giving it all to God, to praising God for his grace and mercy, and encouraging other believers in their faith. Their lead single, "Come However You Are," exemplifies catchy hooks with their message of giving all their burdens to God and encouraging listeners to come just as they are to Him. Other highlights on the record are "Lift It Up," "Your Love Still Wins," and "Like I Am," all of which help round out their sound and the messages they want to share with their audience.

Instrumentally, the record is pretty standard CCM fare. City Harbor does a pleasant blend of indie and alternative with worship and commercial pop, which gives them a unique presence while staying well within the means of the radio-friendly sound. The piano and guitar are heavily featured throughout their music, and Reed and Earle do a great job of harmonizing their voices and trading lead vocal duties during songs.

City Harbor is a modest and engaging effort, and it does a good job establishing City Harbor's footing in the CCM world. While their instrumentation does a good job of utilizing both current trends and modern worship, their lyrics could be much stronger. Everything they're writing about is relevant and heartfelt, but it would be interesting to see them experiment with their lyrics on future projects. Regardless, City Harbor should satisfy fans of the alternative styles in mainstream music, while offering uplifting messages in their lyrics.