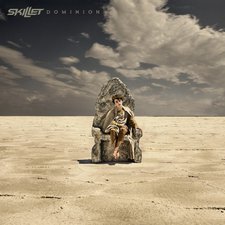 
A surprising degree of brevity rests between hard rock outfit Skillet's latest release, Dominion, and their previous LP offering, Victorious. However, the two-and-a-half-year gap seems to have stoked a new element of creativity within a band where staleness had begun to run rampant. A marked number of improvements are seen, and Dominion does a fine job of blending a few different eras of the band's overall sound, leading to what is ultimately a successful project.

One of my most consistent critiques over this past decade has been the band's overreliance on attempting to recreate Comatose, arguably the band's most successful album. This time around, frontman John Cooper has taken a few bold steps away from that formula, but not at the expense of undermining the better elements of Skillet. The album also makes effective use of drummer Jen Ledger's smooth, piercing voice, which (as always) elegantly pairs and contrasts with Cooper's aggressive, energetic vocals.

Dominion opens with "Surviving the Game," a dynamic, spirited track which synthesizes ambient, electronic, and hard-rock elements to great effect. Its catchy melody and "can-do" lyrics ("show 'em what you're made of, victory's for the brave ones / never bow the knee 'cause it's 'do or die' / one more time, survivin' the game / I can be unstoppable, gonna walk through Hell") makes it liable to end up on a number of workout playlists.

The next piece, "Standing in the Storm," is one of Dominion's best tracks. Showcasing a surprisingly effective example of Cooper's "flow," portions of the piece are evocative of Linkin Park's earlier offerings. The title track, "Dominion," bears an aggressiveness harkening back to Skillet's Collide era, which will doubtlessly hit home and please a number of Panheads.

"The Valley of Death" is one of Skillet's best ballads in years, boasting sincere lyrics and a genuine plea for salvation: "Love and laughter turn to tears / what will come tomorrow, is it joy or sorrow? / memories faded through the years / now we've got some smile lines, we've had some good times / say You won't forget me 'cause sometimes I don't believe / that I am not alone in the Valley of Death." Careful listeners will also find a melodic Easter egg lurking within the song. The following track, "Beyond Incredible," hits the target consistently and is par-for-the-course where Skillet is concerned. "Destiny" rubs shoulders with a few different genres, touching on power pop and alternative sounds at different points.

The ballad "Refuge" was one of the earlier singles released by Skillet back in 2021. Its calm melody and worshipful lyrics ("I can face my darkest night 'cause I trust You with my life / I'm not afraid, for You are my refuge") denote this track as a primed radio single, while still remaining a solid track. "Shout Your Freedom" is very much a "shouting song," reminiscent of the hearty energy found in many early 2000's radio hits. The following track, "Destroyer," labors to craft a unique ambiance for listeners right from the beginning. The results are ultimately mixed, but the boldness and tenacity are laudable.

The album begins to wind down with "Forever or the End," a duet which Cooper and Ledger knock out of the park. The song is both memorable and heartfelt, and is representative of some of the best lyrics Cooper has published in a good while: "Tell me what you're thinking so I don't have to pretend / 'cause your mind's a million miles away / I'm outside the go-zone, way beyond the ozone / you treat me like a stranger at the gates / why you gotta make it so hard? / why you gotta push me so far? / Just another weekend where we are barely speaking / hoping that the silence keeps us safe  when you said "forever," is this what you meant?" The lines aren't overly complex, nor do they bear a try-hard watermark. This self-contained simplicity lands smoothly, making this piece a definitive album highlight.

The penultimate track, "Ignite," is an inoffensive, guitar-heavy song which doesn't particularly stand out. The album closes with "White Horse," an eschatological adventure filled with mayhem and chaos, sporting lyrics derived from the Book of Revelation. The closing line, "didn't you hear the word of the prophet? You should have known; I got the words of God in my mouth!," may raise a few eyebrows, but with a wild structure and distortions which are a tad unsettling, this song leaves listeners with a potent (albeit jarring) aftertaste, an element lacking across recent Skillet releases.

Clocking in at around 45 minutes, Dominion sits at a comfortable length, making the experience of its presence known without overstaying its welcome. The band has (wisely) opted to branch out stylistically, and they should be applauded for amounts to a clear improvement over their previous release. There were only two lackluster aspects which stood out: The first (and most prominent) pertains to the lyrics and their overreliance on repeated "I'm a champion" motifs. While the ideas of victory and overcoming are key facets of Skillet's messaging, it has been overdone on Dominion. The second fizzle is found in the slight lack of "big," glorious, catchy moments. In other words, it is unclear which of these tracks will be major crowd pleasers at live shows five years from now.

In the end, as is made clear by this album's four-star rating, neither of these critiques seriously detract from the overall experience of Dominion. Cooper and company have delivered yet another album which is sure to please the present-day fans, and one which may even bring a few departed Panheads back into the fold.

It's clear the current cultural climate has sparked a fire in the gears of the long-lived machine that is Skillet. Not since 2013's Rise has the band sounded so convicted. While recent albums were marred with stories of hazy battles and even hazier ways to overcome them, Dominion is focused and intentional, combining equal parts "kingdom now" eschatology with defiance of tyrannical ideals. I was pleased to finally hear overtly Christian lyrics surfacing, especially in the "out on a limb" closer "White Horse." Musically, the band is more dynamically diverse than perhaps theyve ever been. Tracks like "Destroyer," "Surviving The Game" and "Dominion" see lead guitarist Seth Morrison maturing mightily in his riff construction, and it was a treat to hear him fully embrace the extended solo section of the title track with finger-taps and shredding not before explored to this depth. "Valley of Death" is a standout piece with its humble piano, strings, and insights drawn from Psalm 23, before a crescendoing bridge catapults it into a full-blown power ballad. Jen Ledger's complementary vocals shine as always, and it was a nice change of pace to have her take the lead for most of "Forever or the End." My only complaint is the rather bland "Refuge," and the cringy quasi-rap section in "White Horse." Even with these minor quibbles, Dominion is far and away the bands strongest effort in a long time, showing growth in nearly every aspect while still retaining their signature sound  a task that has been "easier said than done" for far too many veteran bands. - Review date: 1/15/22, Joel Zaloum of Jesusfreakhideout.com