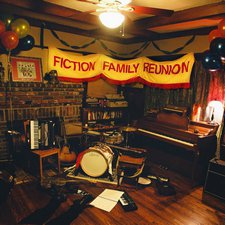 Jon Foreman and Sean Watkins took their fans by storm with their side project Fiction Family four years ago; with an acoustic-based musical approach and a carefree, but all the more meaningful, lyrical style, their self-titled record brought quite a bit of combined talent to the table in unexpected, masterful ways. However, with a renewed creative philosophy and two new "family" members added to the mix (drummer Aaron Redfield and bassist Tyler Chester), Fiction Family Reunion is an exciting project from an accomplished band of brothers.

Part of the initial allure of Fiction Family's debut project is the stripped-down, authentic feel that isn't always present in either Foreman or Watkins' primary projects. Switchfoot fans were treated to an upbeat, but toned-down, Foreman (outside his prominent solo EPs), and Nickel Creek lovers got a small taste of a harder edged Watkins with another talented, but non-folk experienced, musician to perform alongside. The idea and its execution were impeccable, and spurred on by the hit "When She's Near," Fiction Family was a smashing success. Cut to 2013 and the family has taken a drastically new form. Foreman and Watkins still largely carry the band's vocal duties, but beyond that area, the instrumentation here is a completely different story: the percussion is far more prominent, and the dynamics are noticeably heightened from a duo's strumming to band members indulging in their mutual love for musicianship. The good news, however, is that it all works remarkably well.

Collectively, Fiction Family Reunion is hard to describe because of the many dimensions it tries to showcase. Listeners get serenaded with softer, folksy charm with tracks like "Damaged," "Never Call," and "Reality Calls," which will remind them of the unplugged, acoustic charm of Fiction Family's debut. But there are still plenty of moments of sheer ardor for experimentation that keeps things comfortably unpredictable ("Avalon," "Give Me Back My Girl," "God Badge," "Fool's Gold"). These musical attempts across the spectrum can initially give off the feeling of Fiction Family Reunion being inconsistent and messily produced, but at the same time, that's exactly what the quartet is aiming for. Foreman and Watkins formed the project with jam sessions and playing around, and their lack of organization carries over while still putting out a complete, polished product. Fiction Family was never born out of business or material gain; it was for the love of the making the music, and Fiction Family Reunion evokes that feeling in any listener.

Despite any sense of disarray on Fiction Family Reunion, the album holds together surprisingly well. It's musically bright, but often lyrically inquisitive and thoughtful, and that's the defining factor to kick up the album's prestige an extra notch. A mild profanity aside ("h*ll"), "Up Against the Wall" directly addresses daily injustices while indirectly pointing to the eternal answer to it all ("the judges robes are stained, and the jury don't seem to care/our love is a puzzle that can't be solved"). But even more heavy-handed is the convicting, mandolin-tinged "God Badge," taking aim at hypocritical Christians and their attitudes towards others ("Put your 'God badge' down and love someone /there is no 'us' or 'them,' there's only folks you do and don't understand/you're not your own ideal"). It's a diplomatic, but still convicting, message, and it's moments like these that elevate the project to the "above-average" category.

Fiction Family Reunion is able to carry many seemingly conflicting descriptors: impulsive but controlled, sometimes somber but habitually entertaining, unfastened but structured, and sophisticated but unrefined. Foreman, Watkins, Redfield, and Chester perceptibly poured quite a bit of creative energy into the project; though it may not be the Fiction Family that fans will connect with immediately, most changes are welcomed and improve upon an already impressive precedent, and not unlike most families in their growth, the adjustment to the new additions is worth it. There's plenty to dig in and voraciously enjoy at the Reunion, and this year in music is off to a great start as a result.

- Preview date: 12/24/12, Review date: 1/27/13, written by Roger Gelwicks of Jesusfreakhideout.com class="coversize" align=right> Early Thoughts...
Jon Foreman and Sean Watkins took Switchfoot and Nickel Creek fans by storm with their side project Fiction Family four years ago; with an acoustic-based musical approach and a carefree, but all the more meaningful, lyrical style, their self-titled record brought quite a bit of combined talent to the table in unexpected, masterful ways. However, with a renewed creative philosophy and two new family members added to the mix (drummer Aaron Redfield and bassist Tyler Chester), Fiction Family Reunion is an exciting project from an accomplished band of brothers. In contrast to the minimalist precedent set by Fiction Family, there are several added layers of sound and instrumentation throughout this project, most notably on the ambitious opener "Avalon," the bouncy and satisfying "Give Me Back My Girl," and the convicting "God Badge." But the overall product is an expertly mixed collection of the old and new with the familiar folk leanings of "Up Against the Wall," "Damaged," "Just Rob Me" and "Reality Calls." Several listens seem to indicate that Fiction Family Reunion is a slightly better realized project than the supergroup's first go-round; with a more solidified approach throughout, it's well worth it to attend this reunion and get reacquainted with the new and improved Fiction Family early next year. Until then, fans would do well to check out the band's Holiday EP from NoiseTrade for a small preview of what's to come... - Preview date: 12/24/12, written by Roger Gelwicks of Jesusfreakhideout.com --->