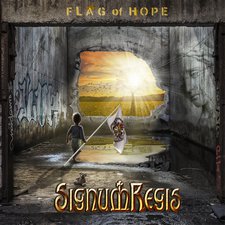 
Signum Regis (a name that just rolls off the tongue) is a Slovakian power metal band formed in 2007. They've gone through their fair share of lineup changes, most notably adding lead vocalist Jota Fortinho to the mix in 2019. One of my past hangups with the band was their over-reliance on guest vocalists and cameos without an established frontman, but with Fortinho at the helm, their latest venture, Flag Of Hope finally connects all the dots.

While seven songs could conceivably constitute a full album, three of these are instrumentals, with one cover, so listening to it certainly feels short. Opening up with a bang, "Given Up For Lost" relentlessly drives forward with power chord chugs, double bass, and the mile-high vocals of Fortinho. Fans of "happy metal" will find a lot to like here, but the band is clearly well-traveled, enveloping classical, jazz, and classic rock influences into their European-power-metal center. The cover of Angra's cult-classic "Stand Away" is a bold move, as standing up to Andre Matos' legendary falsetto is no easy task, but Fortinho pulls it off without a hitch. What gives this song its classic status is the interplay between the rhythmic storytelling background singers and the lead vocal, and the band handles it masterfully, showing both their range and attention to detail.

"Voyage To the Distant Shores" was the most surprising of the bunch. It's a jazz-infused instrumental that takes you on a musical journey, with each step more dynamic than the last. This is not one of those filler instrumentals that simply lead into the next song, nor is it a shred-fest with no direction. It eats like a full song, having a repeated "chorus" and catchy melodies, along with eccentric scales and chords emitting nautical visions.

The next two tracks are more standard power metal fare. The title-track boasts the EP's most ear-catching chorus, and its positive message gives you a hint of the band's lyrical approach, "I remember those words the wise man said/It's about who'll withstand the storm and stay in the game till the end." "Tune of War" is a mid-tempo rocker, with themes focused on the war against sin and evil agendas, "For the holy cause let your passion be seen/let your outrage be felt/let the forgotten men be heard/soon the page will be turned." The mix of heavy riffs, powerful vocals, and uplifting choirs made me think of Rob Rock, Avantasia, or even a heavier Bon Jovi.

The final two instrumentals, "Amorenda" and "Ave Maria," are not quite as dynamic as "Voyage," but I did enjoy the medieval atmosphere of the former, and the bass finger-tapping (to Bach's famous "Prelude") in the latter.

Flag Of Hope sees Signum Regis finally establishing a consistent core, fortified by a charismatic frontman, and a panoramic array of musical tastes. This EP, back by popular demand (originally it was five-tracks and only digital), showcases a band primed and ready for steady success, and I'm eagerly awaiting their next full-length to hear the next step in this direction.

Record Label: Beyond The Storm Productions